Run in the dark for Ark-Ark

I have a friend, almost family, who has been dealt a rough hand but a big heart. Mark Pollock, mad about the sports and super-fit, had his last retina drop off in college. It didn't stop him rowing (Commonwealth silver medal) or running long distances in insane conditions. A few years ago, he fell out of a 2-storey window and broke his back. Largely because he was super-fit he survived and has since made himself a guinea-pig for research in neuro-regeneration which current science asserts is impossible for motor nerves. Backstory Shortform If you are having a bad day, just reflect on the months Mark spent in a rehab hospital in England and the years he's been tooling about in a wheel-chair since. Living under such conditions is much more expensive than it is for me and you: putting yourself into a high-tech regime of interventions is beyond the purse of any normal family. A few years ago, someone had a bright idea called Run in the Dark for Mark which hosts 10km and 5km runs [in the dark] after work in November . . . all over the world. The event raises significant funding for the research and rehabilitation projects which Mark is spear-heading. Lots of motor-cycles out there, lots of young people come off them while doing the ton and finish up like Mark. Shame if we can't do something to get them out of bed and back in society.  All the fit-enough people who are friends-and relations of Mark have been doing the RITD for the last 5 years. Why, even I have acted as a steward in the past. 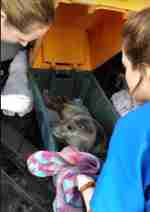 The local RITD happened in Kilkenny last Weds 15Nov17 and The Beloved was all registered up for it.  She was also registered to spend a couple of nights Mo-We with Dau.II in Cork for a birthday and Ikea-stuff delivery. If you are brought up Catholic believing every sperm is sacred then the transition to respect-animals vegetarian Buddhism is a reasonably straight path. How-and-ever, one of TB's ancillary meetings was postponed because her Buddhist oppo had to drive West pick up a yearling seal Phoca vitulina which had washed up all orphaned on the beach somewhere way out West. That seal came home to roost the following day when TB found herself volunteering to drive it 200km across the country to the Seal Rescue Ireland in Courtown Co. Wexford. A yearling is weaned and should be able to survive on its own but this one was well snotty and probably had lung-worm Otostrongylus circumlitus and might benefit from some human intervention. The word went out and another seal, this one much smaller and cuter, was assigned to hitch a ride. At the start of the day, it looked like everything was possible:
collect seals 1300 - leave Cork 1400 - arrive Courtown 1700 - transit home 1800 for calories - start Run in Kilkenny 1930.

But what about the seals? Well they were late! t'buggers are all over the salmon but can they keep time? It wasn't until 1630 with darkness falling that The Beloved was pulling out of Cork, her time-table in tatters. It also transpired that seals, which after all are well blubbered-up are not able for warm cars and TB was obliged to make the trip with the heating off and all the windows open. As this adventure had sprung up sudden-like, she had left home without leather driving gauntlets and a Crombie overcoat, so she dressed in her running gear, pyjamas and all the clothing she had [L?]. She wrapped her head in a t-shirt re-purposed as a hijab, tied round the ears with a silk scarf.  It fell to me to wash out and bleach the transporter box - lung worms are no fun and you don't want the eggs (or indeed the snot and seal-poop) to get left for the next delivery.  Just like for RITD in 2013, I was providing the infrastructural support for this year's Run in the Dark for Ark-Ark the teenage seal. It's all about me.