A little goes a long way

Did I mention that it is science week? I did.  On Monday we had three visiting speakers at The Institute:
- Dr Michael Curtis, the Deputy State Pathologist;
- Dr Niall Moyna, an exercise physiologist from DCU and
- Prof Martin Downes from Maynooth.
I went to the first two of those talks but really shouldn't have gone to the first except to show willing. As a fainter, I cannot always reliably stay upright when presented with images of gun-shots, tram-line bruising and decapitation. Curtis presented loadsa these, each more disturbing than the next. As with the Gardai Forensics team a few years ago, I looked intently at my hands and recited Shelley's Ozymandias while waiting for him to finish. A very little of that is way too much. What I did learn from that talk, which was shocking in a different way, is that nobody in the scene of crime field, certainly not the forensic pathologists gets any counselling or psychological support.

We've had Moyna at The Institute before, and looking back at my notes, [how handy is keeping a blogodiary?] he seems to have given the same Exercise is Medicine talk again.  Same take-home aNNyway. It was interesting because he assumed correctly that the vast majority of the audience - fit people under 30 studying sports rehab, strength & conditioning, sports physiology - would have found his message largely irrelevant. Moyna's case is that a little serious heart-rate raising exercise a few times a week will extend your functional independent living by years at the end of life. That is pretty much beyond imagining to a fit 22 year old who is going to live for ever. Moyna suggested that they could take his message to their parents and to their fat Cousin Bob who appears to be welded to the sofa . . . it's even not too late for Pat the Salt at 92! Indeed, an experiment Moyna set up in a nursing home was able to get 26/28 elderly women out of diapers simply by giving them enough quad strength to get up out of the chair and potter off to the potty. How QALY is that!?

We've know that exercise and coronary disease are inversely proportional since a couple of epidemiological studies in London in the early 1950s. Prof Jeremy Morris [obit - he lived to 99] noted that bus drivers who sit for the whole working day were far more likely to die of heart attack than their conductors who were running about the double-deckers collecting fares. Sedentary didn't help but bus driving is among the most stressed jobs available: all that responsibility, all those mad drivers cutting you off and cursing you out, the kids who run into your path, A parallel experiment found that 'beat' postmen were much fitter and healthier than their colleagues who sold stamps.

You can measure your metabolic activity by tracking you oxygen intake. If you establish a baseline by measuring this while sitting on the sofa, you can then get a handle on your METs = Metabolic Equivalent Tasks for doing anything more intensive.

A walk round the sofa is more intensive, throwing the duvet about, hoovering the carpet, washing the car, walking to the corner shop will all have higher METs. Super-fit athletes are able to exert themselves to 20 MET - 20x the oxygen intake as required for sitting. If I took in that much oxygen, I'd probably self-combust. Super frail osteoporotic people can't manage 10 METs or even 5. 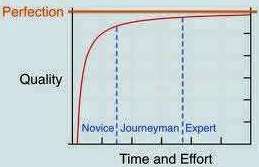 But if they make some effort, the benefits will be mighty.The graph [L] suggests that as small effort by "novices" = deeply unfit will yield disproportionate benefits in the future. The super-fit at the other end of the distribution are caught by the law of diminishing returns: the extra ooomph to secure Gold takes huge commitment to training and exercise. Indeed, youngsters who are scheduled to becoming frail as elders because they now have no muscle tone also should be encouraged to do a little  . . . and a little bit more.

And don't make it a penance! I see now that, in managing my duffers team at school to play it for larfs, I was getting them to commit to a minimal level of exercise for the good of their future health. Putting them in a real team filled with jocks would have made them into refusniks who are now dead of atherosclerosis, diabetes and stroke. Let's get the Health Service Executive stop being the Sickness Drug Doling Executive and put 1% of the annual budget to making folk fitter in funner ways. Whatever it takes to make exercise into less of a chore. I can't find a link but I heard a story about a fat boy whose TV was linked up to a transponder in his shoes. The more he moved the longer the TV stayed on; linking the power to a stationary bicycle might work too.


Posted by BobTheScientist at 07:38