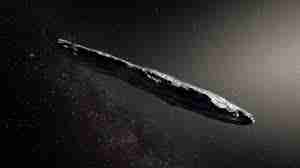 You really should know about 'Oumuamua [R named 'Scout' or fore-runner in Hawaiian] which is in the process of passing through the Solar System. As Freud said, Sometime a cigar is just a cigar. Here an interstellar object called 'Oumuamua is shaped like a cigar about 10x longer than it is wide. How do we know? Because its brightness varies as it tumbles in its trajectory.  I think they infer the length-width ratio from the 10x variation in brightness with a period of 7.3 hours. Its absolute length is 400m. Again that is estimated from physical constants; nobody has been out there with a tape-measure. And they are not going to because we've missed the boat. Having passed 0.2 AU close to us, 'Oumuamua is now travelling towards the outer reaches of the Solar System - receding from us at nearly 100,000km/h.  That's about 2x faster than Voyager I and II.

The hats off thing about astronomers is that from a record of movement of a dot across a series of 2D photographs, they can calculate the 3D trajectory [See above; source] of an object in space. It helps if they have studied conic sections in high school or college. 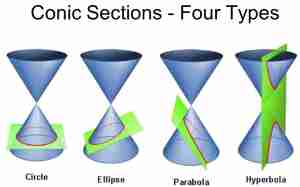 The deal here is that the curve tells the star-gazers whether the object is coming back, which it will if the curve is [part of] an ellipse. Edmund Halley's calcs and historical research told him that "his" extraterrestrial traveller had an elliptical orbit and so would return . . . in 75 years time - and it was so. 'Oumuamua won't. They are confident that the trajectory is hyperbolic. That means that 'Oumuamua was travelling in a straight line through space minding its own business when it encountered a vastly more massive object's gravitational field and was sling-shotted round the Sun and sent off in another direction.

'Oumuamua was first observed a month ago on 19th October 2017. Back-calculations led astronomers to make a couple of earlier precoveries [been there before] when the object was more distant and sufficiently faint that it didn't get flagged.  It seems that perihelion (closest approach to the Sun) was back on 9th September. Being close to the Sun creates a whole other raft of observational difficulties as we heard about burned retinas during this year's solar eclipse.

Reportage: Michelle Starr at ScienceAlert and Uncle Tom Cobbley across the Internet who is collectively on the story like gravy on biscuits. More Blobby astronomy: Sedna - Eris - Mina Fleming -  Annie Jump Cannon - Pleiades - By Jove - Star Boks - others