Science Week trundles along with more happenings and events at The Institute. I almost missed an amazing talk on Tuesday because I didn't recognise either the Name or his company: Eddie O'Connor [who he?] founder of Mainstream Renewable Power [never heard of it]. O'Connor started out as a bureaucratic Mandarin successively working his way up two semi-state bodies: the ESB - Electricity Supply Board and then CEO of Bord na Mona - the company charged with destroying the bogs of Ireland to supply garden mulch as Irish Peat Moss, domestic heating as peat briquettes and power for the electricity grid. It's a bit like looting the fish-stocks of the oceans for cat-food and fertiliser. In 1997, he had a rush of blood to the head and became the founder and CEO of Airtricity. 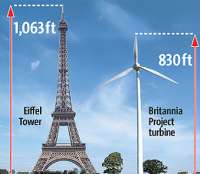 The company was an early adopter of wind-farm technology long-and-long before it became economically sensible and was dependent on playing-field bending subsidies and grants. Over the last 20 years, the cost of wind-power has tumbled so that it is now absolutely cheaper than fossil fuel. Whoever owns the windy sites is sitting on a gold-mine because a modest on-site turbine can be replaced with a mammoth 10+MW turbine . . . or two [R from 2010]. No matter how well paid you are as a public servant (semi-state CEOs were capped at €250,000 pa in 2011) the prospects in the entrepreneurial world are fabulous. O'Connor's exit strategy was to sell Airtricity in 2008 for €1,800,000,000. That was 7000x his final year's salary in BnaM ! And more power to him. So getting him down to talk to our engineering students (and me) was a coup.

But I'm not here to talk about energy futures or the fact that 10% of the World's electricity is consumed by server-farms storing cat food: Snapchats, crap snaps, Friendface trivia, and millions of duplicate copies of Michael Bublé hits. I have one point to abstract from Eddie O'Connor's talk. Many small compnaies regard maternity leave as a burden which has to be, willingly or otherwise, sucked up against the bottom line. O'Connor sees it as an Opportunity rather a Threat. It gives his company a chance to stir up the personnel: if Mairead is out for six months, we can have Kevin and Sinead split her work load and hire a new graduate with a quirk skill-set to try out something new. It's a bit like a soccer team playing a few practice games with the centre-forward in goal etc.: everyone sees their tasks from a different point of view and esprit de corps gets a boost all round.

The evening before O'Connors talk, I had a meeting with one of our suits. It was on foot of someone finally picking up on my annual analysis of the domicile of our graduates, which I do for my own interest and because, as a data-wonk, Ich kann nicht anders. It was just after Niall Moyna's talk about the holistic virtues of having fit people about the place. One of Moyna's points had been to ask ironically if the students and staff parked their car as far from the campus as feasible in order to get a 5 or 10 minute walk in at the start and end of the day. I can't walk, or even cycle [done it once, nearly died], from home because it is 40km away but I could park off-campus and walk the last km in. That would mean paradoxically that I could leave home later because to be sure of securing a parkplatz I arrive at 0830hrs.  But my pal The Suit suggested that having tight parking issues was Good because it kept everyone on campus for serendipitous collegiate happenings. If you don't drive home for lunch because you'll lose your treasured spot, then you might stay and have lunch with the some engineers and thereby ferment a cross-disciplinary research project or think about a new course for the students. Or, being on campus, you might notice that one of your students is looking all woebegone . . . and do something about it. I pointed at the tyranny and privilege [and huge cost] of parking in August.