That would be today 20th May, the third Saturday of the month. Even at this early moment, walkers are starting off on the 31 km trek up hill and down dale in the Blackstairs 'Mountains'.  As the highest point on the trail Mt Leinster is a mere pimple at 795m, it is a little ambitious to call them mountains. Then again the peak is more than twice the height of Vaalserberg 323m the highest point 'in' the Netherlands. Vaalserberg actually marks the edge of the country being the Drielandenpunt / Dreiländereck between NL BE and DE.  This should remind you of the cunning plan to cede 1.5 ha of Norway to Finland to give the Finns something of their own to look up to. Finland is another shockin' flat country.

To participate in the Blackstairs Challenge you have to be fit enough to cover the distance in 10 hrs. I guess if you fail to make it you annoy the stewards who have to go back and find you before dark. Two years ago, I wrote about (with added maps) that walk. I've never done it. It's on our doorstep, I can do the walk whenever I want and so am very unlikely to do it ever . . . that's the way with the familiar: it's not valued. But I have walked long distances in Portugal and Spain and have a certain amount of empathy for fellow hikers. We've been living in the Blackstairs for 20 years and a couple of months now; and for the last 15 years, at least, we have provided water for the walkers on this day. When I remember, like this year, I make a slab of Bob's Famous Flapjacks and leave a tinful out near the tap. 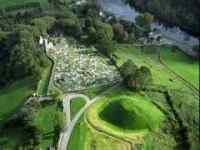 Since time immemorial, many of the walkers (the hard chaws) have rough camped on the green at St Mullins for Friday and Saturday nights. The walk finishes in a pub in the next village Glynn and walkers are not fit to go anywhere in a straight line after 'rehydrating' in that hostelry. It has something of the atmosphere of a medieval jongleurs festival, which is wholly appropriate for one of the most evocatively romantic medieval sites in Ireland [R with river frontage, holy well, motte&bailey, packed graveyard and amazing medieval mill race]. This year, the dreadful Carlow County Council has officiously ringed the green with No Camping signs. I have no idea how the walkers are to be accommodated and you may bet that Carlow CoCo don't give-a-damn.

About a month ago, there was a bit of a flap because walkers up our lane were being made anxious by a "Beware of the Bull" sign on one of the two gates between the county road and the mountain itself. I was contacted by the Wayfarers' Association, who organise the Challenge, to see if a) the bull was real b) the bull was feisty and c) the bull would be there today. I txtd and phoned around and found out who was running shaggable cattle on that part of the townland. I am happy to report that the bull and his harem have exhausted the grass on the Walk-way and have been moved two fields over.

Forecast for the day is good "Patchy rain in the northeast at first, soon clearing. Otherwise today will be a bright, fresh day, with sunny spells. Scattered showers also, mainly in Atlantic coastal counties at first, becoming more widespread during the day, many of them heavy, with scattered thunderstorms developing, mainly in the eastern half of the country during the afternoon and early evening." Walkers don't like it too hot and scattered showers can be waited out in the lee of a hedge. Excuse me, I have to prepare the pit stop . . .
Posted by BobTheScientist at 07:16