Last Man on the Moon

Gene Cernan died on 16th Jan 2017 at the age of 82. He was  a Slovak on this father's side and a Czech on his mother's and was honoured in 1994 with the Order of the White Double Cross by his father's people for giving Slovakia an out of this world boost. He was, although few will remember this, the Last Man on the Moon [film-clip trailer]. 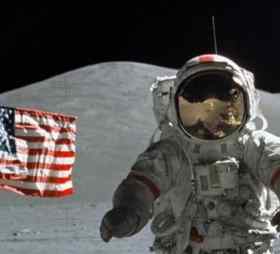 You can see him [R] in the studio in California where NASA rigged up all their moon landings. Harrison 'Jack' Schmitt, the photographer is more recognisable than Cernan himself, reflected in the visor of the helmet. I've written before about the bodging can-do fix of the Lunar Rover which Cernan carried out after he'd knocked a lump of the world's most expensive car. That's why engineers are handy to have around, they are good for fixing material things. Cernan was the Captain and so had the honour of being the last back onto the ship before the Apollo 17 module blasted off to take Cernan, Schmitt and 100kg of rock [Schmitt was/is a geologist] back home to Planet Earth. When they took off, they knew that Apollo 18 had already been scrapped by Congressional bean-counters, so had a racing certainty of being the last chaps to set foot on the Moon but Cernan was optimsitic about a return: "And, as we leave the Moon at Taurus–Littrow, we leave as we came and, God willing, as we shall return, with peace and hope for all mankind. Godspeed the crew of Apollo 17." Rather too much god-bothering in its sentiments for my taste.  Of the Apollo Twelve Moon-walkers, only six are now left alive. Obit here from the Reactograph and a Moon Triv Quiz from The Blob.
Posted by BobTheScientist at 06:54