I wrote a brief obit for Eugene Cernan, the last man on the moon, a couple of weeks ago. I felt I could be brief because I'd given him a fulsome trib in December 2015. It cost a lot to get Cernan and the other eleven moon-walkers to the surface of the moon and back: so much that the Human Genome Project, which cost about $1billion, usually employed the US Space Program as the only comparable mega-science endeavour. There were costs along the way which are hard to dollarise and costs afterwards as two Space Shuttles came back to earth in small pieces. 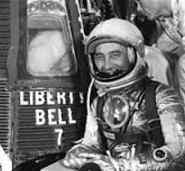 I was reflecting on the costs because yesterday was the 50th anniversary of the Apollo I disaster when three astronauts were incinerated on the launch pad during a practice run on 27th Jan 1967. Of the three dead men, Gus Grissom, Ed White and Roger Chaffee, Grissom's name struck the memory bell loudest. He was Indiana's most famous son and a fighter pilot in the Korean War before he was picked to be a NASA astronaut: one of the Mercury Seven. As with Neil Armstrong and Eugene Cernan there was a lot of Harry Potter 'Eclipse first the rest nowhere" in Project Mercury . The first man in space, John Glenn, became a household name and eventually a US Senator and Presidential candidate. You have to have been around as a small geeky boy to remember the names of the others. Gus Grissom was the second man in space; in those days, the pilot got to name the ship, and Grissom plunked for Liberty Bell 7 [the pair see R].  He almost lost his life, not in a dramatic fireball like the Challenger or Columbia space shuttles but in a botched landing /pick-up after a successful mission. After splashdown the pilot was meant to sit tight until a chopper from the nearby aircraft carrier hooked on and lifted the spaceship to the flight-deck. In somewhat murky circumstances, the capsule door blew off while LB7 was still bobbing about on the ocean, waves slopped in and a lot of expensive kit sank into the depths. Grissom slithered out and nearly followed his command down when his space-suit started to take on water. His buoyancy wasn't helped by having smuggled 2 rolls of dimes onboard to sell as souvenirs afterwards. He ever afterwards denied triggering the explosive bolts, but not everyone believed him. A fellow who could bring half a pound [almost exactly the weight of 100 dimes] of unaccounted weight aboard such a delicately balanced project could have done pretty much any dopey thing. It's similar to the Apollo 8 astronaut who pressed the Don't Press This Button button and unravelled Margaret Hamilton's computer program. There was a tension between the NASA management who wanted the astronauts to be quiet passengers while they controlled everything from Houston and the astronauts, almost all previous test-pilots who wanted to be doing. Doing some daft things like Alan Shepard bringing a 6-iron and two golf balls to the moon and whacking one of them into the distance. NASA believed Grissom had not been tricking about with the door, let alone panicking to get relief from claustrophobia, and that's all the counted. He went up in Gemini 3, becoming the first man to do space twice but was still eclipsed in the public mind and history by John Glenn and Neil Armstrong.

Whatever you feel about the sinking of Liberty Bell 7, Apollo 1 was a good candidate for a Normal Accident: a cascade of small-small t'ings had to go wrong or go unnoticed. The inside of the capsule was pressurized a little above atmospheric with pure oxygen (!). A smoldering candle will burst into full flame in such an atmosphere. One of the ironies of the disaster was that the door was designed to open inwards - partly because of Grissom's earlier mishap with out-opening doorways. Another door shouldered some of the blame. An access port had, through repeated opening for inspection, stripped off the insulation of a silver-coated copper wire. The inspections were necessary because a tube transporting ethylene-glycol coolant was always leaking. With 20:20 hindsight it was revealed that silver had a positive electrolytic effect on ethylene-glycol and the ignition wouldn't have occurred with plain copper wire. One suspects that the silver coating was there to justify a fabulously inflated price for the material by NASA contractors North American and Grumman. They charged top dollar because they could, but their workmanship was often shoddy, the delivery time-keeping weak, and design-flaws manifold.  We remove our shoes in the run up to all air-flights now because on 22 Dec 2001 Richard "Bat-shit bonkers" Reid smuggled a bomb aboard an American Airlines flight in his shoes. Likewise, the NASA contractors stopped using silver coated wire anywhere rather than thinking about the next potential hazard. If ethylene-glycol started the fire, there was plenty of flammable material in the cockpit to keep it going. The walls had been almost carpetted with Velcro which had been recently invented by George de Mestral; this allowed the astronauts to park pretty much everything while weightless but burned very well in pure oxygen . . . likewise the space-suits.

If you read Richard Feynman's story of the Challenger disaster and investigation, and you should, you'll get the feeling that NASA's managers were culpably negligent in heeding the concerns of their astronauts and terrestrial engineers about redundancy, safety, testing, and analysis of complex systems. Mean with the routine but necessary checks and balances, they were spend-thrift with contracts and were always cranking up the ante to make NASA more sexy and pioneering. It was as if they knew Congress would only buy into the idea of space-travel if the projects became increasingly complex and hard to fully comprehend. Feynman concluded that NASA management were almost ideologically incapable of grasping probability and risk-assessment.

In 1999, three decades after it sank, Liberty Bell 7 was recovered from the ocean floor. 52 more dimes were found loose in the capsule. It seems that Grissom wasn't the only one sending souvenirs into space - but he was the only man with the bottle to ride with the illicit payload.