What goes around comes around

The other day, in a piece about Amazon and UPS causing gridlock in suburbia, into I threw in some comments about the logistics of shifting widgets and gizmos round the country in the most efficient way. There are economies of scale if producers talk to each other and to prospective end-users. A vast freighter loaded with Stuff from China and bound for Rotterdam has consolidated the output of a thousand factories which is bound for 1,000 retail outlets: one ship = a million transactions. This works because of money, a universal medium of exchange. Try imagining what got traded for what to have two jade axes transported from Central Italy to Southern England 6,000 years ago.

Despite the use of QALYs in medical care, not everything can be dollarised, there are other measures of value. Apart from anything else your value system is different from mine: you care a lot more about your aged mother than I do. Nevertheless the fungibility of money requires some vigilance that nobody sells their blood for beer . . . except in the US where plasma is a commodity like any other. Blood is handy, red blood cells have a turn-over of about 3 months, so it is not unknown to meet people who have donated 50 units of blood over a life-time. In Ireland such people get a little medal. Kidneys, lungs, hearts are a different matter, you con't make another one of those because the design blue-print gets discarded in utero. You probably have two kidneys; I definitely do; but for 1 in every 500 live births only one functional kidney is present. Those people trundle through life without any obvious deficit, so one kidney is redundant. Other people lose their kidneys [cancer, shot off in the war] or suffer progressive loss of kidney function, (diabetes or hypertension) although the empty cathedral is still there. But all is not lost because of kidney donation. 33,000 organ donations were carried out in the US last year, the majority of them kidneys.

If one of your family needs a kidney transplant, you might be tempted to donate one of yours. That might work out well because you have half your genes in common with your sibs, children and parents and the major histocompatability complex MHC genes are therefore more likely to match. You need some advice - there are risks associated with general anaesthetic and major surgery - and your surgeon needs to have informed consent forms signed by everyone. You can't have another baby to supply a kidney for your ailing beloved because the infant can't sign the form. The technical term is saviour sibling, if you wish to follow it up. If might read Kazuo Ishiguro's Never Let Me Go for a vision of the ethics of transplantation. Actually, it turns out that donors have a slightly longer life-expectancy than matched folk who keep their organ inventory intact. But that's probably because donors are less like to booze and pizza themselves to an early grave. But some assert that it is due to feeling happy about donating which has positive PNI benefits. 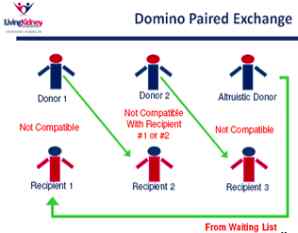 If your kidney is a poor match, the economies of scale kick in, you can profer your kideny to the Living Kidney Donor Network LKDN and they will find a match and a potential donor from the recipient's family. Or if that simple exchange doesn't work out, the LKDN may be able to slot you into a Domino Pair Exchange [R].  The United Network for Organ Sharing UNOS is the umbrella body that actually manages these exchanges. They have developed algorithms = allocation calculators to manage who gets what from whom. The Kidney Donor Risk Index (KDRI), for example asks about age, ethnicity, BMI, hypertension, diabetes, HCV status. Why hypertension? Because the kidney is essential to maintaining blood-pressure. But also because high blood-pressure is possibly what blew out the kidney in the first place and the causes of that need to be addressed before we pop in a new one.

Like the illegal drug trade there is an element of caveat emptor about selling your kidney - which is worth $80,000 on the black market - because there is no regulation or oversight. You're sorted if you live in Iran apparently where organ sales are legal. Is it conceivable that organ harvesting is happening in χινα from executed criminals? There was a report about it in the middle of last year.
Posted by BobTheScientist at 07:42