Oh ho, Friday the Thirteenth, let's not be in a rush to recognise [reports of] ill-things that happen on this day, because they are probably in the normal range. As our family gathered over the Christmas & New Year, it seemed like a lot of celebrities were going down. The girls were down, and both of them are 'on' Friendface, and their social network was restlessly pointing to yet another death. Carrie Fisher was one noted , her mother Debbie Reynolds the following day, John Berger on Christmas Eve.  I was going to put together a tribute in the form of short clips respecting each well known person's death, but then we had our internet access issue and I didn't get round to it. That also made me reflect of the folly of watching youtube clips as a way of passing the hours compared to, say, reading . . . books. ANNyway, between us we quickly knocked off a list of a dozen famous folk would had died in 2016: Andrew Sachs, Loenard Cohen, his muse Marianne, David Bowie, Prince, George Michael, Vera Rubin, AA Gill, and Richard Adams. It seemed like a lot. Because of availability error, it was much easier to remember Carrie Fisher and Debbie Reynolds than Muhammad Ali, or Eli Wiesel whose deaths in June 2016 are fading from my memory despite being blobbed up at the time.

Because of the immediacy /availability of the recent it can seem as if 2016 was a bad year for celeb-death and a few people have made that comment. Anyone with a crap-detector should be skeptical about whether such an observation was objectively true but it takes a special type of quant to start shovelling data into a hopper and doing a proper statistical analysis. Jason Crease is The Bloke for doing it. Picked up on Metafilter, where the comments are, as often, worth reading. One comment points out that, with Crease's sort of analysis we can measure whether John Lennon was 'bigger' than Jesus rather than just taking Lennon's assertion to be true [he isn't].

[aside: another comment draws attention the story of a Brazilian woman over many year praying to a statuette of Elrond believing it to be St Anthony. Dau.I also picked up that story a couple of days ago and told me, which allowed me to point out the parallel's with George Orwell being saved from the brink of starvation by praying to a picture of  a courtesan]. 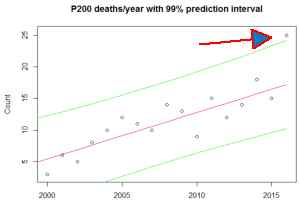 This is Crease's bottom line for the date of death of mega-celebrties. I've added the arrow pointing out that 2016 is just above the 99% confidence interval. You expect that many deaths in a year about once in two centuries, so it's not a holocaust but it is indeed more than expected. You'll have to click on his article to get the list of 2016's crop of famous-folk. And while you're there, check out the comments at the end, which are instructive.

Posted by BobTheScientist at 08:12