Rabbits Orychtolagus cuniculus are members of the mammalian order Lagomorpha. They are not rodents, although in the grand scheme of mammalian taxonomy the two orders are close (as are We The Primates) within the Subclass/ super-order Euarchontoglires. One of the defining characteristics of the Lagomorphs is the presence of two diminutive 'useless' incisors tucked up behind the prominent "what's up doc?" first incisors. Rabbits are not kosher because, although they have split 'hooves' they do not chew the cud. Cud chewing is what cows, sheep and goats [Order Artiodactyla] do: having allowed a load of grass to ferment awhile in the rumen, these animals barf it up and give it another going over in the mouth to abstract maximal nutrition. Rabbits double down the digestion too by re-eating their own, first-pass, green, poos to give them another journey through the gut. Neat, eh? Efficient use of the microbial flora of the gut - we should all give it a whirl. As discussed before, whales and dolphins (and pigs!) are Artiodactyls but are not kosher either; because they live in the sea but do not have scales. The whole kosher thang is a series of rules-of-thumb to stop the chosen people eating the wrong food before the days of DNA testing to determine relationships and a proper understanding of food hygiene and the sources of nematode parasites. You can choose to emphasise the wisdom of the ancients in the matter of spoilage of pork products or put it all down to woowah mumbo jumbo. On dit que, the highest loads of intestinal worms are to be found among Lutheran pastors of the US Midwest, who are obliged to sample the, some doubtful, home-made sausage of all their parishioners. 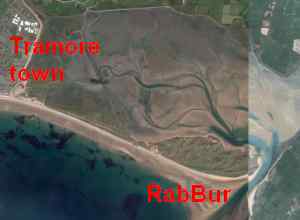 As you know, for Christians and post-Christians, perhaps especially at Christmas, pig Sus scrofa pork, sausage, hammmmmm good and rashers are okay to eat - Chrosher, maybe? And so are rabbits. Rabbits have been in my mind a lot over Christmas, which we spent with Pat the Salt down in Tramore on the Waterford coast. On Christmas Eve evening, I escaped from the heat of the kitchen to take a long blustery walk along Tramore strand to the rabbit burrows [R R = RabBur] at the far end. It's a round trip of about 7km and I've never done it before. Tramore strand is a classic sand-dune system combed out from the rocky headland, on which the town is built, by the prevailing West-to-East current. The back-strand is an interesting domain of tidal slobs and wetlands which was used for several decades as the county dump! There is very little evidence of rabbits in their eponymous burrows nowadays but in the olde dayes, sandy islands in Ireland were often used as rabbit warrens; and this is captured in several place-names, like Coney Island, clapper = Fr clapier = ME clapere rabbit burrow or hutch; coneygarth = cunicularium; coniger etc. Information which I have gleaned from Paul Murphy  Dept Arts, Heritage, Regional, Rural and Gaeltacht Affairs

12 days later, I was on the beach again, this time on the South coast of Wexford taking a constitutional with friends at Bannow Island. The landscape is very similar to that at Tramore, some barrier dunes protecting an area of slobs and mudflats from the full ravages of Atlantic storms. Bannow Island is not at present an island because the sand has piled up on its Eastern flank to join it to the mainland. The tide rips twice a day through the narrow gap on the other side. The slobscape changes radically after each storm. One of the hummocks on the island is believed to be a man-made rabbit warren and has been the subject of an archaeological dig as described in a chapter by Paul Murphy, doctoral student NUIG, in a new book Medieval Wexford: essays in memory of Billy Colfer eds Ian Doyle and Bernard Browne a snip at €45! And hats off to Mr Murphy for getting such a prestigious publication before he gets his doctorate.

As it happens, even at the moment that I was trudging along Tramore Strand, Richard Adams was dying in England. He was 96 and crossed The Bar just a few miles from Watership Down, in Northern Hampshire, and the place he'd been born, Newbury, just across the county line in Berkshire. You may sing along: Bright Eyes. Watership Down grew from a story about talking rabbits which Adams started to tell his two daughters on a a car-trip in the 1960s. In many ways it is a most unsuitable story for children, especially girls, but it is almost more a story of our time, with 50 million displaced persons shuffling about the planet, than it was 50 years ago. The rabbits are seeking a better life for themselves because their home place has been destroyed by humans in the name of progress. Adams insisted that it was just a story but others have read it is a parable and one of the most inspirational journey stories [Aeneid; Odyssey; Wizard of Earthsea; Canticle of Leibowitz; Grapes of Wrath; Heart of Darkness] ever written. The Metafilter link has dozens of expressions of grief and tribute about how Watership Down changed their young lives. One of the critiques of the book is that the does [doe, a rabbit, a female rabbit] are mere ciphers in the story and that this is what you would expect from the patriarchy. But St Caitlin of Moran's take on such issues is more affirming; a step in the right direction shouldn't be knocked right over and kicked because it doesn't address all the evils of the world. Watership Down pointed out some of the key issues in setting boundaries to the civic state; taking a difficult ethical stance; trusting your pals; and the peculiar condition called leadership, for which responsibility some most unlikely candidates step up to the plate: ". . . the race is not to the swift, nor the battle to the strong, neither yet bread to the wise, nor yet riches to men of understanding, nor yet favor to men of skill . . ." Ecclesiastes 9:11
Posted by BobTheScientist at 07:59