That would be today. Isabella Mary Mayson was born on 12th March 1836, 180 years ago. She lived a shocking short life. She was married at 20 was constantly pregnant for the next 8 years, endured the deaths of two of her four children and suffered numerous miscarriages. She died of "puerperal fever" a few days after the birth of her last daughter in 1865. We think of her as matronly, Victorian, dressed in crinolines and running a household full of cooks and maids, but she didn't live long enough to get wrinkles except of course the stretch marks of pregnancy. For her time, she was treated as a grown-up and [fairly] equal partner by her husband the editor and publisher Samuel Orchart Beeton.  21stC biographers have suggested that as well as sharing the credit for the books and magazines which they wrote and published together, Samuel also shared a dose of Treponema pallidum which he had acquired from his pre-marital liaisons. The cause of Isabella's puerperal fever was more likely to have been syphilis than group B Streptococcus.  Both of those discharges issues have been largely confined to the dustbin of history by effective anti-biotics, but we can anticipate their return as antibiotic resistance spreads. 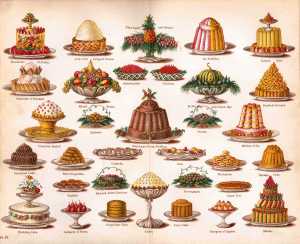 What else do we know about Mrs Beeton?  [apart from the cakes?!] That she wrote Book of Household Management, the best selling cook-book of the 19thC. She did; although she didn't see much of the benefit and nor did her surviving husband, who sold the rights to Ward, Lock for half nothing. That she laughably began one of her recipes with the instruction "First catch your hare". She didn't; and nor did Hannah Glasse another foodie-guru; although the latter did commence her receipt [sic] for roast hare with "take your hare when it is cas’d".  The BoHM was compiled from her column in the periodical The Englishwoman's Domestic Magazine which was published by her husband. Her column in turn was plagiarised and condensed from other cookbooks of the day and they say that the only original contribution was her receipt for

Soup for Benevolent Purposes
"An ox-cheek, any pieces of trimmings of beef,
which may be bought very cheaply (say 4 lbs.),
a few bones,
any pot-liquor the larder may furnish,
1/4 peck of onions, 6 leeks, a large bunch of herbs,
1/2 lb. of celery (the outside pieces, or green tops, do very well);
1/2 lb. of carrots, 1/2 lb. of turnips,
1/2 lb. of coarse brown sugar,
1/2 a pint of beer,
4 lbs. of common rice or pearl barley;
1/2 lb. of salt, 1 oz. of black pepper, a few raspings,
10 gallons of water."
Cook for 6 1/2 hours.
Cost: 1 1/2d /quart
Ten imperial gallons is about 50 litres so you need a stock-pot bigger than you'd find in domestic kitchen today.  The soup was made regularly in the Beeton household and lurried out to their indigent neighbours in Pinner, South London during the brutal winter of 1858.  That's my sort of recipe: any X the larder may furnish is equivalent to my whatever you find in or behind the fridge.