Stephen Wolfram, [Bloboprev] who has good claim to being the smartest man in the room during most of his daily existence, has just been interviewed on The Edge.  He talks for 100 minutes. With transcript! if you're the least bit nerdy or interested in AI, you could do worse than skim the transcript.  If you like your edutainment without few car-chases and a blizzard  of ideas, then do the video. Towards the end of his piece to camera he asks if there is any evidence that there is intelligent life on our pale blue dot as viewed from space.  We all now acknowledge that you can't see the Great Wall of China from the moon, it's too narrow and wiggly.  When NASA sent it's exploratory landers to Mars, they included some tests to see if life-as-we-know-it exists on the red planet.  That was a very narrow definition/imagination of life - as the ability to metabolise glucose - which we would be ashamed of today. 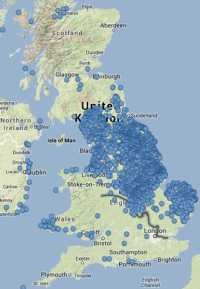 One of the ideas that Wolfram develops in his ramble across the universe is that big data and computer literacy such as is encouraged by CoderDojo has been highly empowering to young people. Their effective coding ability can ask, and answer, questions about our world which would have previously been only addressable by academics with access to a big library and decades of experience and accumulated knowledge.  The image [L] of the distribution of Norse Placenames was generated by the British Museum and it's wonderfully informative - there is Danelaw after 1000 years.  But that sort of insight could be generated by dozens of 13 year old data-minors.  Of course they are more likely to map the density of Justin Bieber tweet-tribs than the history of the Vikings but the point is that original, interesting research is available to people who haven't been to college and don't have The Calculus or Ulysses under their belts. My pal El Asturiano sent me some wonderful mappy links a couple of days ago: a zoomable map of the Roman World from the Austrian Institute of Technology. And Harvard's equivalent. 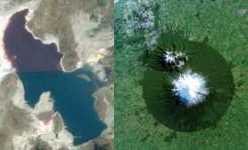 Wolfram goes from programming to the Turing Test for evidence of Artificial Intelligence to the wider question of the planet. Who better to ask about evidence of purpose or structure or intelligence on the face of our planet but a bunch of astronauts.  They didn't mention the Gt Wall of China, of course but rather a) a curious straight line across the Great Salt Lake in Utah - which is caused by a man-made causeway that separates the two halves of the lake into different microbial communities b) a curiously precise circle around Mt Egmont/Taranaki in NZ which is due to differential grazing either side of the perimeter fence of the national park.  Other examples include straight lines of lights along the trans-Siberia Railway and on boringest 150km road across the Nullarbor Plain in Australia.  I've always thought Nullarbor was an aborigine word but it's straight Latin: Null-Arbor = the treeless.

You don't want to confuse regularity (straight lines, circles) caused by 'intelligent life' with regularity caused by pure physico-chemical effects. This has been a problem in trying to find evidence of early life in rock-strata which are much are well over a billion years old.  Perfectly spherical microscopic objects don't answer but fossilised  'tetrads' [L] in ancient rocks are most likely to have arisen in the course of two cell divisions to make four identically sized cells still stuck together in this characteristic pattern.
Posted by BobTheScientist at 07:51