Quiz time!  Without peeking below, have a punt at who salutes the flag on the left?  Clue: hammer and sickle.
Hereabouts because of Uncle Jim from South Boston and the cultural hegemony of Hollywood we associate 4th of July with Independence Day and phone our pals in America to say hi.  My telecoms supplier Vodafone offered subscribers free calls to +001 on that day this year. I had a long catch-up natter to my Boston pals, in one case while she was watching fireworks over the Charles River. Because of ATT's cultural control of North America above the Rio Grande, Canada also has the international dialing code 001 and I could have called friends in Ontario and Québec but was phoned-out after contacts with Boston.  Two years ago, I pointed out that 4th July is also Independence Day in Atlantis no Azkaban Abkhazia!  A state of affairs recognised by very few but including Transnistria which is celebrating its Independence Day today. 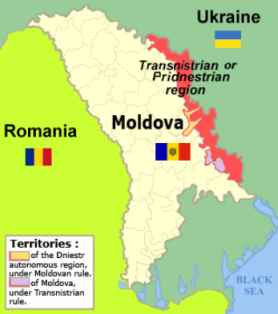 The region around the Дністе́р Dniester River has had a checkered and war-torn history as the great artery wends its way through Ukraine and Bessarabia to the Black Sea.  In Soviet times the Moldovan SSR incorporated territory on both side of the river but in the turmoil of the early 1990s, [some of] the people on the left bank did not want to leave Mother Russia.  The ethnic mix there was about equal thirds of Russians, Ukrainians and Moldovans.  Note the distinctive similarity of the flags of Moldova and Romania [R]: Moldovan is a romance language like Romanian since it was an outpost of the Roman Empire 2000 years ago. They probably think they are more civilised than the Vikings and Slavs that are their neighbours to the East. Anyway, there was a series of bloody confrontations in the Summer of 1992 and since then Transnistria (the region across the River Nistria) has been de facto independent of Moldova. In the map, pink is controlled by the Pridnestrovian Moldavian Republic - PMR or Pridnestrovie. You can see that the River is as wriggly as the Mississippi and there are both type-I and type-II errors in the territorial control: the lilac regions are on the right bank but in control of the Vikings/Slavs and the beige areas are on the left bank but under the control of the Romans. In all about half a million people are involved in the, now reasonably stable/peaceful, affair. A PMR passport is just about useless, because the country is only recognised by other ethnic fragments which have difficulty securing recognition themselves: Nagorno-Karabakh Republic, Abkhazia, and South Ossetia.  <smug>We're doing rather well in Western Europe; despite two major conflicts and lots of ethnic cleansing the EU has settled into a multi-ethnic zone of peace and prosperity.</smug>
Posted by BobTheScientist at 08:16