You are who you eat

We have taken "down there" for granted for far too long.  Since the beginning of humanity 2 million years ago [since long before indeed], we have been toting around a couple of kilos of bacteria, mostly in our large intestine, but also up every orifice and on every epithelial surface.  Since the beginning of science 2 centuries ago, we have been studiously ignoring this ecosystem.  We know a helluva lot about trophic levels and population cycles on British chalk uplands, in New England ponds and across the Serengeti, but until recently we have been in the dark about our intestinal flora.  We have been utterly reckless over the last fifty years with the profligate use of antibiotics for trivial infections, let alone as growth promoters for chicken. Everybode kno that antibiotics don't work on viruses, but they are nevertheless widely prescribed for viral infections as a prophylactic against a secondary bacterial strike at the virus-damaged tissue.

Recently, the medicos (the brighter members anyway) have started to box a little clever rather than always using a kill-them-all broad-spectrum antibiotic.  If you can encourage the growth of good bacteria, then you can let them out-compete the bacterial black-hats.  It works, for example, in foul-water treatment plants. You can reduce the nitrate levels in sewage, and so reduce the eutrophication of natural water downstream, by encouraging bacteria to convert the nitrates to gaseous N2 which disappears back to the atmosphere for another 100,000 years of inertness.  Which bacteria? Denitrifying bacteria, like Pseudomonas denitrificans and Alcaligenes denitrificans. How encourage?  By judiciously adding a carbon source to the treatment process; carbon is often the rate-limiting nutrient; adding a handful will cause a bloom of P. and A. denitrificans. A small eutrophication in the settlement ponds prevents a larger and less controlled one in the wild: neat! I've already reported on FMT - faecal microbiota transplantation as a solution to the frequently fatal infections by Clostridium difficile that are picked up in Western hospitals.  That's a rather zen-master solution, I find. 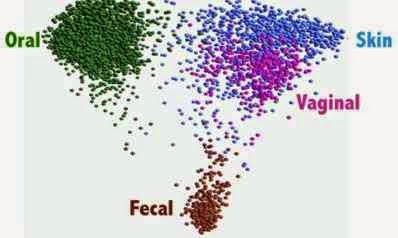 You could with advantage listen to the TED talk by Rob Knight, in which he describes some of the mind-boggling information that is emerging on the importance of our microbial flora for maintaining our normal health but also probably in setting a range of parameters for our mental state.  Apparently your attractiveness to mosquitoes is determined largely by the bacteria you host on your skin and the volatile chemicals they give off. It is not a huge leap to suppose that your attractiveness to sexual partners is driven by the same landscape. Inside, your intestinal flora determines whether the painkiller Tylenol is toxic to your liver or not.  What Knight's group have done is create a crowd-sourced project to sample the bacterial fellow-travellers of some 8000 different people and compare them with each other.  It's complicated and extremely data-heavy but if you apply some clever statistics you can identify trends in the genetic data - data which is based on perhaps 10,000 different species of bacteria in each of us with a combined toolkit of between 2 and 20 million different genes.  There are, for comparison, only 5,000 species of mammal across the entire globe.  The picture above right, shows the two major trends in the data.  Each dot represents a community of microbes from one of four locations (mouth, skin vagina, colon) in a few hundred individual human bacterial ferries. Two things pop out: 1) your oral flora is nearer to mine than it is to your own skin bacteria 2) Your oral flora is more distant from your vaginal flora than the ecological communities found in. say, the Serengeti compared to a Scottish Sea Loch. Neonates acquire an intestinal flora that looks more like normal vaginal bacteria . . . except if they a delivered by C-section, in which case their flora starts looking like normal skin bacteria. Mrs Knight's daughter was delivered by emergency C-section but they took remedial action to ensure that she the daughter was formally introduced to the vagina which she had bypassed in the birth-process. Why were they in such a hurry to slather the newborn in vaginal mucus?  Because the statistics suggest that Caesarian babies are more likely to develop asthma, eczema and obesity.  We'll come back to this story later, but right now you should see the TED talk!


Posted by BobTheScientist at 06:39