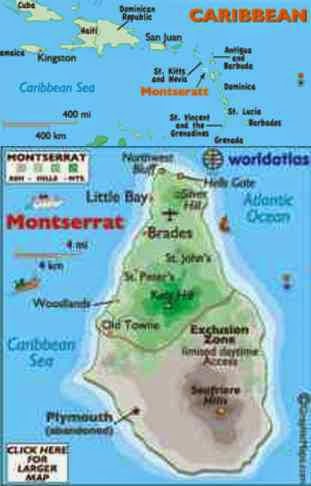 'Tis St Patrick's Day, to be sure and begorrah.  Half the Irish Cabinet is in America viewing parades and quaffing tankards of green beer and taking selfies wearing leprechaun hats.  All good fun and mostly harmless - indeed the argument is made that such antics, paid for by the hard-pressed Irish tax-payer, benefit the economy.  It is little known in Kiev, but St Patrick's Day is celebrated with gustoin one of the Leeward Islands [L].  Montserrat was named after Santa María de Montserrat by Kris Colon as he passed by on his second voyage to the New World.  It was acquired by the Brits and used for a while as a dumping ground for Irish indentured servants aka slaves who have been taken in rebellion and transported . . . and not only by Cromwell.  They were known as redlegs, which is probably a fair description because the Irish tend not to tan very well.  On St Patrick's Day 1768, there was an, ultimately unsuccessful, rebellion by the enslaved which is one of the reasons why the day is still celebrated, with a wild mix of steel-bands and shamrocks.  That is as much authentico as rolling out a Samba School in Dublin.  The weirdest aspect of this history is that the Irish accent has been retained while the redlegs have been absorbed by generations of miscegenation <huzzah> so that the locals have been known as the Black Irish, although you may be sure to be sure that designation is streng verboten nowadays.

When I saw the map, I noticed the red dotted line and "Exclusion Zone" I assumed that the Southern half of the island was used as a artillery testing zone like Cape Wrath and chunks of Northern Dartmoor in the UK.  But it is not military but natural explosives that people are being protected from.  In July 1995, the long dormant volcano in the Soufriere Hills started rumbling and dumped 12 m of mud into the island's capital Plymouth [crappy movie].  It's still rumbling on with periodic drama as everything that volcanoes are capable of is thrown out - ash venting <coff coff>; pyroclastic flow; the more dramatic pyroclastic surge that can travel up hill; vulcanian explosions >!BOOM!<.  Nobody died when Soufriere surprised everyone: it wasn't catastrophically abrupt like Pompeii.  But half the island lost their homes, plantations and farms, and their jobs.  More than half of them, given rights of settlement in the UK, chose to leave for the cold islands of the coast of Europe, where they presumably experienced both "no Irish Need apply" when they spoke on the telephone and the usual cold-shoulder when their black faces appeared in person.  But enough of that negativity, today everyone is having a party back home in Montserrat.
Posted by BobTheScientist at 09:18