On Saturday 10 days ago, I caught the final 15 minutes of the Ireland vs Wales Rugby International. My father-t-law Pat was conflicted because he is Cardiff-Irish but it was, for him, a win-win situation either way.  Wales beat [23-16] but did not trounce the Irish. It seems fairly straight forward: each country fields a team of fit, strong, agile, skillful young(ish) men to do symbolic battle on our behalf.  It's good, in my book, because it celebrates diversity: it is hard to find "Citius - Altius - Fortius" all three in one man, so the teams are complementary and mutually supportive.  And despite the concerns of neurologists about contact sport encephalopathy CSE, it's surely better to have Our Boys heaving against each other in a scrum than heaving spears and rocks at each other until somebody loses an eye. There is a Machiavellian argument to be made against wall-to-wall broadcasting of professional sports every week-end afternoon - surely it would be better to get the citizenry off the sofa at home and shedding some pounds on a local sports field.

There are other sports where the lines are a lot more blurry.  Less about Citius/Altius/Fortius and more about Sexius/Scantius/Exploitius. In another of my tirades against boxing, I mentioned Alexei Sayle's throwaway critique of rhythmic gymnastics, suggesting that it was more like pole-dancing [Saddius] than pole-vaulting [Altius].  So you don't have to, I've trawled through youtube to find a short example of a Ukrainian young-wan Viktoriia Mazur cavorting with a ball. She can do amazing things with a whip too.  But if it was only about her dexterity and fitness she'd be doing her perf in  track-suit, wouldn't she?

But what's floating my boat today is a related issue in the world of professional music.  I like a bit of classical music and where better to find it than on youtube. If it was just about the music we'd either have a) sound only youtube files or b) concentrate on the hands of, say, Yuja Wang as they go blurry from one end of the keyboard to the other [L].  When the top male pianists perform in public they are still dressed up like 19thC waiters in black and white; but when top female pianists appear on stage they are undressed in something gorgeous and off the shoulder - so that they can get the necessary freedom of movement (hmmmmmm?) - not as stripped down for action as Ms Mazur but nevertheless  it's not just about the music here, is it?  To give you a head-start in getting to see fit young-wans pounding the keyboard, I've done some research: 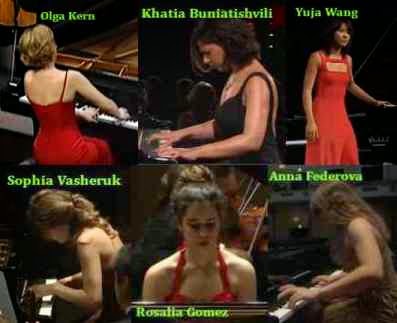 All different, gorgeous all . . . and the music is good too.  A celebration of diversity if ever there was one.  I did look for youtubes of overweight female pianists, with acne and glasses, but they don't seem to win any competitions. I'm not sure how to test this hypothesis but I don't think that symmetry assorts genetically with musical ability.  Do you think that the judges of musical competitions are disproportionately heavy with older men?
Posted by BobTheScientist at 14:35