"Michaelis-[Menten] Kinetics" is an biochemical in-joke because this piece has its concentration on [Menten]. If you've done undergraduate biochemistry, the graph on the left may give you the heebie-jeebies.  It shows how, in an idealised, primary colour way, you can calculate Km, the Michaelis constant for a biochemical reaction.  The constant depends on so many variables - the temperature, the pH, the enzyme, the substrate, their relative concentration - that it can only be calculated with reliability in certain cases, under strict conditions that bear no relationship to the roiling tumult of interfering molecules that is the inside of a cell.  It is an example of reductionist science and it is always presented to students as a practical exercise to be completed in the next three hours while the sun is shining on the lawn outside.  I suspect it has done more to turn students to other fields than any other experiment.  One thing to blame is that, in the desire to get good figures, so that a graph may be drawn, so that the unknown parameters may be calculated, the students are not asked to critically evaluate the assumptions that underlie the theory. Who to blame?  Certainly not Michaelis or Menten who did the pioneering work on the biochemistry of the breakdown of the di-saccharide sucrose into its constituent glucose and fructose.  Their work was published as Michaelis L. & Menten ML. (1913) "Die Kinetik der Invertinwirkung" in  Biochemische Zeitschrift 49: 335–369.  The enzyme they used is called invertase because the substrate sucrose rotates light to the right while the products fructose and glucose give light a slight leftwards twist.  Glucose on its own will rotate light to the right, which is why it is often called dextrose in food product lists to disguise the fact that the manufacturers are horsing in more sugar.  According to Joe Felsenstein in a comment, the standard for the the M-M equation was in fact derived by Briggs and JBS Haldane (is there no end to his talents?) in 1925, and the fundamentals were discovered much earlier by Victor Henri but not widely published or properly understood. You can read a very interesting dialogue of war-stories about the youth-of-today and the giants of the past in the comment thread cited just above. 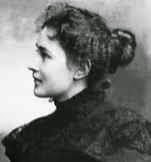 It turns out that Menten ML, is Maud Menten [L] a pioneer in biochemistry and pediatrics who happens to be a woman and Canadian and a lot easier on the eye than her !@&!! equation. It's her birthday [1879] today!  Don't feel obliged to lift a glass of high-fructose corn syrup in her memory, but by all means raise a glass of something mildly alcoholic (and better for you that HFCS).  She was born in Ontario, took an Arts degree at U. Toronto before she realised that she was an extraordinarily good pair of hands and she qualified with a MB (1907) and an MD (1911).  Between her two medical degrees she spent a couple of years at the Rockefeller Institute working with Simon Flexner, who also hosted Alice Hamilton a few years earlier. An essay critically investigating Maud;'s many degrees.

Although Maud Menten was a brilliant bench scientist, as you can tell from the intensity with which she stares at the small conical flask [L], she had many other talents: she was an accomplished painter, could play the clarinet, work an astronomical telescope, make tasty scones and shortbread, yomp up a mountain and speak at least five languages. She couldn't drive a car, however, or rather she shouldn't have been allowed on the road; so she agreeably had feet of clay. I can't find anybody who has a bad word to say of her - except for the driving and even there she never killed anyone.  And plenty who were willing to give her tribs [4m40s movie] including getting inducted into the Canadian Medical Hall of Fame - which makes her seem like a baseball star but I can find no evidence that she added second-baseman to her long list of accomplishments. Writing about women like MM from the perspective of now, makes her achievements seem much less than they are.  In 1913, we didn't know for sure what enzymes were, let alone how they were made, women hadn't got the vote anywhere except New Zealand, we were still 40 years adrift from knowing what was the structure of DNA or the alpha helix of proteins. She had to work twice as hard (and she was notorious for putting in 18 hour days) as a man to get where she did - eventually full Professor at U Pittsburg - and twice as hard as us moderns to make the fundamental discoveries that we all now take for granted.  Bonnets definitely off!

More women in science.
Posted by BobTheScientist at 06:44