Last night we didn't get home till today - 0010hrs.  It was film night at the Blackstairs Film Society, a group which is hirpling along the edge of solvency but still going after seven years.  Each of those years we've stumped up €50 (each!) to see 8 films over the months of darkness Sep-Apr.  In the early years, we had to black out the windows with bin-bags when sundown was bleeding the colour off the screen at the end April.  They show films like Jiro Dreams of Sushi which I reviewed a year ago: films with sub-titles. Apart from the stalwart time-and-energy-donating committee I think we're probably the only people who are still there from the beginning.  Several years ago I asked a friend, a former member of the club, why we never saw him on film night.  His reply went "On a brutal winter's night I should dash through horizontal sleet to my car, drive through puddles of uncertain depth to sit in a barn with rattling windows, wrapped in a blanket, hat and gloves to watch a worthy film with sketchy sub-titles about infanticide in Mongolia?".  Love it, but then I'm an aficionado of ironia.

The main feature last night was Museum Hours by Jem Cohen.  It's brilliant!  It gives an updated view of 'real' Vienna to compare with The Third Man.  I say real because The Beloved came out saying she would not be in a hurry to go visit that city. In The Third Man the streetviews are relentlessly sepia, in Museum Hours they are relentlessly seepy, bleak and univiting - until the protagonists step off the street into a bar or a cafe or, indeed, the eponymous Museum to continue their rambling conversation.  He is a guard in the Kunsthistorisches Museum, She is a middle-aged Canadian come to visit her estranged and now comatose cousin in hospital. So yes there are sub-titles; and yes, there are no car-chases: it wouldn't classify as 'exciting'.  But it was deeply engaging, perhaps in part because the Canadian is played by Mary Margaret O'Hara.  We first encountered her in 1988 at a concert in a disused cinema in Newcastle Upon Tyne when she was promoting her one and only album Miss America, which you may hear on youtube to get a hint of her extraordinary vocal range and sensitivities.  I guess we only went because we were home-sick for Ireland and saw her name on a poster - but we definitely bought the album after hearing her belting out A New Day. 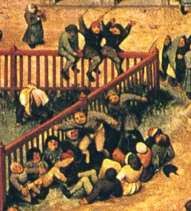 Another huge attraction for me is the intellectual meat in the film including an explicitly didactic explanation of the life and works of the first Bruegel. That aspect of the film is very like another favorite 'watching paint-dry' film of mine My Dinner with Andre, which I'll have to write about later.  As an aside, we are forced to appreciate that really famous paintings are not located in a book or on a postcard or in Google - they are in a particular museum.  The Kunsthistorisches has a shocking amount of these, so well-known artworks.  Bruegel is good for detail - his paintings serve as Finding Wally puzzles from 500 years ago.  You could spend a lifetime, as a museum guard say, looking at a handful of his paintings and discover a new quirk or joke every day.  I'm sure my film-buffy pals will have picked up more depths of resonance between the streets of Vienna in 2010 and the streets of Flanders in 1550.  I am now resolved to use them in my next treasure hunt.

So that was an evening well spent, even if we regretted forgetting the blanket.  Our Man From La Mancha wasn't going to get much out of a film where the only bits he was likely to understand were when the dialog was in German (it's the subtitles innit!).  But rather than abandon him to his English studies at the kitchen table we left him off in the village hall of the local hamlet.  There Seamus Begley, world famous trad singer, and friends were leading a céilí. How cultural is that?  The choices we have in the boondocks.  Begley clearly wouldn't be shut up because we sat in the car at 2oC for 45 minutes waiting for the music to finish and to pick up our Man.  And that's why we didn't get home till after midnight.

Incidentally, all you chaps in Ukraine have enough time to charter a plane to come over the next event in the Film Soc. - 22nd February we're showing Like Water for Chocolate, as the third in our annual Foodie night Specials. €12 for a film and all-you-can-eat buffet - sub-titles are thrown in for free.  побачити вас там !!
Posted by BobTheScientist at 08:33