We've had The Boy and his family a-visiting for the last tuthree days.  They flew in this time rather than driving the car, so they have been down to short commons on stuff.  My mother tells a story of us being stopped in the 1960s at the ferry-port by an Irish customs official who want to know the contents of that suitcase.  When opened it exploded with what seemed to be dozens of gumboots - essential for Irish holidays but not what you'd bring if you're limited to hand-baggage only.  Dau.II made up for some of the shortfall by sharing some of her stuffed teddies with the niece, which was kind and a nice change for The Wean. 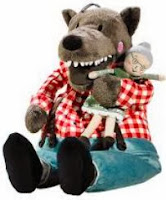 Stuffed toys are in the news (well it's getting a bit olds now but I'll share the story anyway) at the moment.  This tidbit hasn't made it on to the Wireless at RTE anyway, quite possible because the necessary language may shrivel the ears of the nice people who listen to RTE for their info about world affairs.  ANNyway, it appears that IKEA has set up an outlet in Hong Kong that strange enclave of capitalism within the People's Republic of China.  The richer members of the population can get a new kitchen, some meatballs and a cheese-grater just like ordinary folks in the West. Three cheers (one for the kitchen, one for the meatballs, one for the grater) for globalisation!  One of the products in the IKEA lifestyle is a stuffed wolf which the Swedes call Lufsig.  It comes with the wolf's lunch (aka LRRH's granny) which may dip the sales of the ould meatballs, hmmm?  Not many people in Hong Kong are fluent in Swedish, so the catalogue transliterated Lufsig into Cantonese as "路姆西" ("Lo Mo Sai") and they hoped for modest HK sales of this alien cultural reference in the run-up to Christmas.  In fact, the wolf leapt off the shelves and was sold out within three hours of IKEA opening it's doors on 8th December 2013.  Why?

Because the day before, in the fine democratic tradition of egging our leaders, someone had heaved their Lustig at Leung Chun-ying the chief executive of the HK puppet state, whose nick-name in some circles is Wolf. The news went viral and it became a statement of freedom from oppression to own your own ammunition.  In the fall-out it transpired that if you looked at "路姆西" sideways in  Cantonese it could be read as a homophone for "mother's vulva".  And the act of throwing Lustig at Leung CY was to call him a m*th*rf*ck*r.  Which suggests that the language of political abuse has come down a few notches from the old Maoist days when he would have been a "lick-spittle communist paper-tiger".

We won't explain to The Wean yet that (teddy) bear is a homophone for bare (naked) fnnnarr ho ho ho woot woot.
Posted by BobTheScientist at 07:51