First kid: "My uncle's got a wooden leg"
Second kid: "So what, my aunt's got a cedar chest"
And my response is (it's all about me) - my grandfather had a glass eye.  He didn't lose it in the First War, although he served traumatically in that conflict, but rather in WWII when his home in Dover suffered bomb damage and a splinter of glass did for the original eyeball.  I've no idea where he bought his glass eye, as children we were too busy engaged in try to guess which eye it was rather than just asking him for the relevant information.

Leopold Blaschka was born (1822) into a business that made glass eyes for a living.  "The only way to become a glass modeler of skill, I have often said to people, is to get a good great-grandfather who loved glass; then he is to have a son with like tastes; he is to be your grandfather. He in turn will have a son who must, as your father, be passionately fond of glass. You, as his son, can then try your hand, and it is your own fault if you do not succeed. But, if you do not have such ancestors, it is not your fault. My grandfather was the most widely known glassworker in Bohemia.".  But Leopold was also passionately interested in the natural world and made some glass models of marine invertebrates as a change from eyeballs and costume jewellery.  These came to the notice of George Goodale, the newly appointed director of the Harvard Botanical Museum.  He commissioned Blaschka to make some botanical models of plants that could be used as demonstration and teaching aids.  This blossomed into a 50 year relationship with Blaschka Vater und Sohn, shipping some thousands of models from more than 800 different species.  It is rather wonderful that the most delicate and beautiful things that most of us handle - angiosperm reproductive parts - are in their very nature ephemeral.  Yet they have been preserved in a guise with a different sort of brittle fragility for more than 100 years.  Curiously, the records of the Blaschka company and Harvard being so complete, we can date each of the surviving specimens.  It seems that some years were much more fragile than others but nobody knows why.  There is a project there to see if something (volcanism, local pollution, drink taken by old Leopold, the supply and suppliers of soda ash) correlates with the hyper-delicate cohorts.  Here's more on their products. 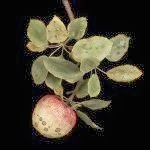 And to prove that the collection is not just a lot of pretty ornaments, Harvard commissioned the Blaschka's to make models of common plant pathologies, so that their trainee agronomists would know apple scab (here shown on Malus pumila) if it jumped up and bit them.  To make the models to a level of accuracy well above the brief they were given, the Blaschkas spent hours and hours carefully researching in the library and observing, often microscopically, the specimens they were commissioned to make. It's the kind of attention to detail that is absolutely familiar to certain types of scientist as they try to wrestle the truth from the the living world with their two eyes and perhaps a pair of tweezers.

There is an extraordinary story about Donald Schnell, a botanist who spent 10,000 hours (I exaggerate a tad for effect) trying to work out how the carnivorous butterwort Pinguicula gets pollinated.  Anatomical dissection of dozen of specimens of the flower and some serious thinking and comparing his species to what was known about related organisms convinced him that he had cracked the problem.  Years later, when visiting the Glass Flowers at Harvard, Schnell saw that he'd been scooped 100 years earlier by Blaschka the Elder who laid out the whole story, including the insect which did the biz, as a moment frozen in time.  Clearly attention to detail staddles the two cultures of CP Snow.

Posted by BobTheScientist at 06:20