So long bro', I'll see you before Christmas!  That's effectively what Dick Rutan said to his brother Burt as he and his co-pilot Jeana Yeager flew East away from the coast of California on 14th Dec 1986. They were still flying East when they returned 9 days later in time for breakfast on 23rd December.  They had just flown round the world.  In doing this they had pushed the envelope of physics, of design, and of the human spirit.  Yeager is no relation of Chuck Yeager who had a starring role in Tom Wolfe's book about the Gemini astronauts The Right Stuff.  That Yeager never made it into space but he was the first (or second?) person to fly faster than the speed of sound. People, engineers even, thought it was possible, probable even, that the sound barrier could not be crossed without destroying both plane and pilot: that's why it is called a "barrier" rather than something neutral like "transition" or "1300km/h".

Jeana Yeager met the Rutan Brothers in 1981, when she was 29, at an Air Show because they were, all three of them, barking when it came to flying.  Over lunch they designed an aeroplane to break the record for flight time on a single load of fuel.  That stood at about 20,000km: held by the crew of a USAF B52 bomber since 1962.  Burt Rutan was sure that he could design a plane that would double that record to fly round the world which is, by definition, 40,000km in circumference. Yeager was an accomplished draughtsman and could translate a sketch on a napkin - no kiddin', that's where they roughed out the design - into engineerable parts.  Jeana and Dick fell in love with each other as the three of them threw themselves into the project that came to be called Voyager.  It took more than five years to get the design off the napkin and finally into the air for the big trip.  It takes a huge amount of determination and follow-through to get such a project to bear fruit.  In the end they got through $2million of their own and donated funds and mobilised scores of volunteers who put in 22,000 hours actually building the machine. 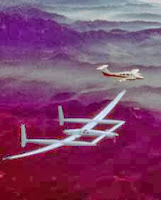 This pic is a bit pixellated but gives some idea of the unconventional design that Rutan came up; a regular 4-seater Beechcraft Duchess plane is included for scale.  Voyager had a wingspan of 33m which is about the same as a Ryanair Boeing 737 which is able to carry 200 people rather than just 2 crammed together in a cockpit the size of 3-seater sofa without the cushions, let alone a t'ilet. It weighed just over 1000kg empty, about half of which was the two engines, but had more than 3000kg fuel on board.  Where on board?  The plane looks like it's made from pencils but the wings and the nacelles are as hollow as the structural engineering requirements allowed.  Voyager could get airborne but was a pig to drive especially when over-laden; the front 'canard' wing was a kludge to stop the thing stalling. A few weeks earlier a blade from the propeller had whacked off on a test flight and, as they only had one toy to play with, they were unable to load-test the structure but just had to believe the engineering specs.  Compounding the engineering worries, Jeana and Dick's relationship had stressed out and come apart at the seams three months before The Off but neither was going to cede their seat in the greatest adventure of their lives.  The round-the-world flight-plan required 225hrs air-time.  Up till then, the plane had only spent 300hrs aloft and during that time had experienced 7 major emergencies.  The team was betting that no/nul/zip/zero/nada emergencies would occur in the next 200 hrs - see what I mean? Barking!

You have to have a heart of stone if your spirit doesn't lift as Voyager finally perks up her wings (watch!) and takes off after lumbering along the runway for a nail-bitingly long time. Before the perk-up, those fuel laden wingtips had been dragging along the tarmac, not only slowing the take-off but also sanding off the outer layer of kevlar and carbon-fibre. A normal person would have aborted the flight at that stage but so much had been invested in the project that nobody was keen to do so.  Not least, I suspect, because the plane was known to handle badly when heavy and pilot weren't in a hurry to come down again surrounded by 3 tons of aviation spirit.  The Duchess chase plane took off with Burt aboard to have a look at the damage and concluded that it was symmetrical and that it would be best to knock off the winglets (the vertical whoosits on the wingtips) which were hanging by a thread. So Burt advised his brother to accelerate until these parts of design shook themselves loose.  And it was so, and they were OFF out across the broad Pacific, and en route round the globe.

As I say, a few minutes over 9 days later they returned to California with 98.5% of their fuel expended (100km to spare!) and one engine fritzed out because of an airlock in the fuel line.  They had survived, or made long detours to avoid, severe weather patterns (Typhoon Marge pictured) and had been refused entry into Libyan airspace which also required a fuel-depleting detour: 1986 was between the two Gulf of Sidra Incidents  (1981, 1989)  when US Navy jets shot down Libyan warplanes in murky and rather undiplomatic circumstances.

Voyager never flew again but finished up in the Smithsonian National Air and Space Museum, where you can see the abraded wingtips today. "The near catastrophic loss of the winglets on takeoff proved fortunate for us by reducing the wingspan by two feet and allowing the aircraft to fit snugly into the South Lobby."  That's the kind of laconic competence, can-do and make-do that makes American engineering ingenuity the envy of the world.  What Rutan, Yeager and Rutan achieved is so far beyond the walk of ordinary folk that envy is hardly appropriate - I don't know about you but I feel awe and a head-shaking wonder that such hubris and monomania lucked out and won through.  Nevertheless, hats off and a sweeping bow to them.
Posted by BobTheScientist at 07:13