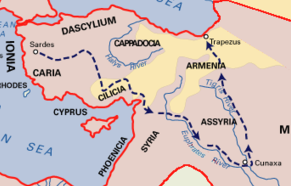 For the turn of the year, I'll tell you a story of heroes.  It has echoed down 25 centuries, so that it has become legend, but we can be confident that in its essential details it is true. The Christian gospels were written maybe 150 years after all the principals were dead. Cassius Dio's History of Rome (Historia Romana) was written 150 years after the last of the Julian Emperors had been replaced by a motley succession of generals and chancers.  But the Anabasis (Ἀνάβασις) was written by one who was there.  Indeed Ξενοφῶν Xenophon, the author, was central to the creation of the story, because without his leadership, decisions and determination, everyone on the trip might well have perished.  It's a bit odd because, although the story has come down to us as the Anabasis (The Going Up), it is really the Katabasis (The Going Down, The Return) which brings the heart to the mouth.

In 400 BCE, the Greeks lived in a rattle of independent city states (πόλεις), each about the size of an Irish county, some smaller.  They had colonies all over the Mediterranean, from Marseille (Μασσαλία) to Trebizond (Τραπεζοῦς) at the far end of the Black Sea and, of course, Alexandria (Ἀλεξάνδρεια) the Great. They were civilised in that not everyone was farming for their own family.  The Polis could, on the back of a more complex economy, support kings, poets, potters, silversmiths and soldiers.  The Greek hoplite was a powerful weapon of the ancient world: in 490 BCE, a much smaller Athenian force of these soldiers had destroyed a much larger army of Persians at Marathon.  Cyrus the Younger had ambitions to topple his brother from the Persian Imperial throne and hired an army of 10,000 Greek hoplites to help him.  These mercenaries were recruited in Sardis on the edge of Greek world in what is now Western Turkey and marched East for 1500km towards the Persian capital at Babylon.  The Greeks decisively won their engagement at the battle of Cunaxa but their boss Cyrus was killed.

This organised and disciplined body of men were thus unemployed and a long way from home.  Their general Clearchus (Κλέαρχος) and the senior officers went off to negotiate a new contract with the victors and were murdered when they arrived at the Persian camp.  So it was left to Xenophon (see right) and other mid-ranking officers to take charge: they were elected by the soldiers because that's how democracy worked in those days.  Xenophon proposed to march North to the Black Sea and there pick up a boat to sail home in style.  That plan was accepted by the army, despite the fact that it involved an 800km march across deserts and mountains through territory full of potentially and actually hostile forces.  Their camp had been sacked during the battle, so they were without any food or supplies.  They set off in good order and fought and negotiated their way North.

The climax of the journey (the tale of which knocks Lord of the Rings into a cocked hat and has a happier ending than Napoleon's retreat from Moscow) occurs when Xenophon, at the point of greatest danger in the rear-guard, hears yet another commotion at the other (front) end of the army which has come to a halt in a mountain pass.  He urges his weary horse forward to engage with this fresh challenge but as he gets closer he can hear that each platoon, as it tops the pass, is shouting : Θάλαττα! θάλαττα. (Thalatta, The Sea) That's how Xenophon, an Athenian, rendered it in Attic Greek.  Many of the soldiers would have been crying θάλασσα (Thalassa, as many Greeks pronounced it then and all do now) and probably crying as well.  The Sea was home for the Greeks and they were confident that it/she would look after them.  Five days later they marched, still in good order, into the port of Trebizond.

I hope that you, looking with me at the now not too distant seas of 2014, feel the same surge of optimism and hope.  Good luck!  καλή τύχη bonne chance удача Succes срећно Toi toi toi! 幸運 boa sorte

Posted by BobTheScientist at 08:39