Some people have me pegged as a Bah Humbug Scroogy sort of bloke when it comes to what I call the Festival of St Mammon.  Years ago, if I hadn't been holding down a full-time job, I'd have made some sandwich boards emblazoned with "Put Xmas back in December where it belongs" and trudged up and down Dublin's principal shopping streets every Saturday in November.  Because, even 20 years ago,  hucksters and merchants started selling stuff immediately after Hallowe'en.  All the WEA academic institutions I've worked in have shut down for at least 10 days from about 23rd December, not opening again until after New Year.  That's a week of productivity (2%!) lost every year: insofar as you can apply commercial concepts of productivity to universities.

I reserve a good pot of spleen for the 21st Century concept of a Kris Kringle (aka Secret Santa) which we've bought into from the Americans.   One of my students at the Institute said that this year his family - parents and eight childer - were going to do Secret Santa to save a mort of money and prevent them all going together when the youngest upsets a candle to start a conflagration of wrapping paper. That's an excellent idea for that family and the planet. I reckon there is no point in doing a Kris Kringle with your colleagues at work unless you're going to be cruel.  The process is in any case rarely secret because it is usually organised by the departmental busy-body who then knows who gave what to whom. That's another reason to rein back on the cruelty, which is best savoured when the victim has no idea who is twisting the knife.  In 2001, I drew myself for the first KK I'd ever been thrown into.  The next day I hunted out an Olde Fashioned Sweetie Shoppe and bought 100g of Olde Fashioned Humbugs which I popped into a jam-jar labelled "Bah Humbugs for Unbelievers" and gave to myself at the party.  Recently, I've got out of it by playing the Oufeller card and claiming I'm too old to know what young wans in the 20s would consider amusing and appropriate. 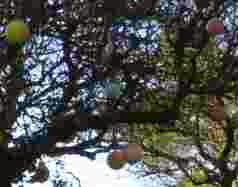 But I do so believe in Christmas!!  Gifts for small children, a generous cheque from Uncle Jim, midnight mass, saturated animal fat, roast potatoes, ham sandwiches and rissoles, too much wine, falling asleep after dinner, more food . . . these are all good indulgences as the days inch out a little longer.  So on Sunday, we (mostly Dau.II) decorated the Christmas Twig and  I also repurposed the Fruits de Mer to bauble-up one of the old leggy apple trees in the orchard.

Ho Ho Ho.  I'm clearly getting into the spirit of things.
Posted by BobTheScientist at 08:30