Today it is St Nicholas' Day. He is the patron saint of sailors, merchants, archers, thieves, children, pawnbrokers and students (I think that covers half the planet). λένε ότι the good man threw a purse (or three) of gold down the chimney of a poor man to supply dowries for daughters. The Day is celebrated across wide swathes of Europe, but in Holland the festivities begin and end on Sinterklaasavond - yesterday - a bit like many N Europeans do the family gifting on Christmas Eve.  In the old days in the Netherlands, Sinterklaas was the main Winter festival when the secular aspects of holy days were expressed.  Calvinists and Catholics alike were apt to treat Christmas as the Birth of The Lord and spend the day in church or prayer and contemplation.  But even the starchiest white ruff over the blackest of coats needs to have the hair let down over it once in a while and Sinterklaas was when you gave children a whole orange or a few sweetmeats.

This time in 1978, I was coming to the end of my half-year stint working in Rotterdam's Diergaarde Blijdorp to fund yet more education.  I've given tribute to the generosity and kindness of my work-mates, but I should also acknowledge that the management were remarkably civilised. On Sinterklaas everyone in the Zoo was given a boterletter (see S at right) by the administration.  There was a fair bit of joshing around about this as the default was that you'd get the letter appropriate to your first name.  Women called Ina would invent a sick nephew called Willem for whom the (larger) W boterletter was destined.  Despite the Is having generous serifs so that they weighed the same as the Ws and Ms, nobody quite believed it.  I couldn't find a picture of the wonderful golden boterletter I got doled out at the canteen that lunchtime, 35 years ago so I've included a chocolade-letter instead.  You can see that the S boterletter is a much better deal: basically a half kilo of marzipan rolled in a thin crust of puff-pastry.  Indeed I have no memory of chocolade-letters, so they may be a recent invention. I think we were also given a half-day holiday, so that everyone could go home and celebrate with their family. 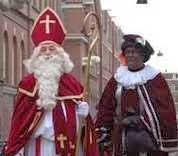 The orange I mentioned earlier has a long association with being given to children at Sinterklaas and the legend of the Saint is tied up with Spain.  Not least in the tradition that Saint is accompanied by Zwarte Piet a wholly politically-incorrect golliwog sort of a servant who doles out the oranges, speculaas and pepernoten which are clearly products of the take-over of the spice-trade by the VOC De Verenigde Oostindische Compagnie - Dutch East India Company.  Over the last two generations the plain people of the Netherlands have succumbed to the relentless pressure of multinational consumerism and homogenisation by taking to celebrating Christmas as well.  I hope that the distinctive traditions of a small corner of NW Europe keep above the flood - diversity is to be encouraged.  "Treasure your exceptions" as early geneticist William Bateson had it.
Posted by BobTheScientist at 06:53