There are a handful of British writers about trees who have shifted our ideas about what a wood is; what wood is and what would we like to do with them. I've cited some before: Oliver Rackham (1939-2015), Roger Deakin (1943-2006), Robert MacFarlane (1976 - ). I haven't mentioned Richard Mabey (1941 - ) yet and it seems egregious to wait till he'd dead and then write an obit. Mabey first crossed our orbit when he wrote Food for Free (1972)  the forager's vademecum. It validated my rather performative consumption of things not bought in shops: bay-leaves, hawthorn buds, blackberries. But more importantly it pointed to a world of nibbles which I'd been too timid to chomp. 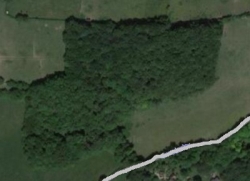 In the middle of October I took out two books from the Wexford library and found time to read them over the following 30 days one of them was The Ash and The Beech (2013) by Richard Mabey. It was originally published in 2007 as Beechcombings : the narratives of trees [full text available on wayback] and it is almost exclusively centred on Beech Fagus sylvatica as the climax tree in normal succession in SE England. The Ash bit is a cynical ploy by the publisher to sell more books when ash die-back started to get traction in England in 2013.  Mabey lived for years in the Chilterns and in the 1980s, he was possessed to possess and wander in his own wood and purchased Hardings Wood: a 7 hectare mixed deciduous wood saddlebacked near the village of Wiggington where? and within hummm of the A41 between Hemel Hempsted and Tring.

There's a lot of heart-wood in this enthusiast's book: arboriculture, beech-mast, commons, ecology, forestry, history. A lot of early modern forests were distinct parts of local commons with rights accorded to local farmers and peasants. Even people without freeholds could have rights [estovers]

You may imagine that pigs scarfed up a lot of seedlings to go with their acorn-n-truffles. Beech was regarded as useless for most of these purposes but adequate for fuel. When cheap coal came on stream with the industrial revolution, there was less dependence on the commons-woods for fuel. Accordingly, it became easier for local magnates and large land-owners to "enclose" the commons; pushing off the minor rights-holders with a once-off payment. Once the community lost their rights, it was easier for the woods to be exploited . . . to extinction, if ploughlands or building plots were deemed to be currently more profitable. The result was 100 years of diminishing cover of the country by woods.

Some push-back came from local consortia but the courts, as always, tended to favour the party with the longest pockets and magnates tended to win. Eventually, Victorian public opinion pushed politicians into legislating to create or transform commons and woods into places of recreation and exercise for everyone. Even those who didn't know a housebote from a houseboat.

Another certainty that the book puts under scrutiny is the idea of succession: that IF humans and their stock would just bugger off THEN any open space outdoors would start to fill in with shrubberies and thorn-brakes which would in turn harbour and protect birch, ash and rowan; which would shelter the slower-growing climax species of beech or oak. There is no known case where any real-world longitudinal study has followed the cycles of upward replacement so neatly shown in ecology text-books.