After lurking for many years, and finding loadsa blob-fodder, I finally subbed up with Metafilter in 2020 and started to make some contributions on the site. MeFi has its own conventions and dynamic but leans old, white, left and US. And every MeFite seems to have a high-maintenance dog or a cat at home: so many questions about how to treat the persistent smell of pet-vomit on bed-clothes! I dunno, I don't come straight to bed in my wellies after working in a shit-strewn field. But loads of people seem to give [their] dog's feet a "clean pass" between outdoors and on the sofa. There was a post recently, framed thus  The Mountain Dogs follows two beloved golden retrievers, Sampson and Baylor, as they climb to the summit of the Pinnacle Trail in Stowe, Vermont each day without their owners. It attracted a couple of dozen comments, all but one of them approving the freedom accorded to these dogs and their owners.

Before that nay-say, I'd drafted my own counter-blast to free-roaming dogs in public spaces . . . but then deleted it and moved on. It seemed a bit gratuitous to rain on the parade of dewy-eyed cynophilia just because I've had a few adverse experiences with uncontrolled dogs. But The Blob? - that's a different matter; this is my parade. So I'll share here my unposted MeFi comment: 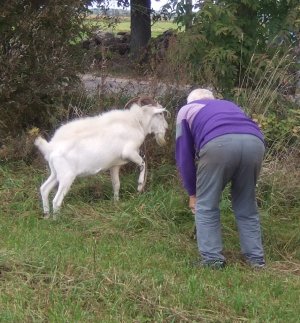 Another county heard from?  My son and I spent part of the afternoon of Christmas Eve 2003 burying what was left of my father-in-law's [LR] pet goat [LL] which had been savaged to death by two dogs from across the road.  The owners of those dogs presumably believed that their dogs would never do anything like that. We own about 300m of a lane, and the fields on either side, which goes up past our home to a extensive area of upland commonage which we are delighted to share with walkers, ramblers, bird-watchers. We also own sheep; it unsettles them to smell strange dogs and they definitely don't like playing chase with any dogs. In Ireland there is a dog attack on livestock on average every day. So I ask people with loose dogs on my property to please keep them on a leash. About a third of the time I am invited to fuck off.

The what was left of phrase is indicative of the the mess The Boy and I faced when we pulled away the tarpaulin which Pat had dragged over his caprine pal. We never found the fourth leg, for example. On the way home from our grisly task, we speculated that we could identify the culprits by finding that missing tibia outside the back-door of one of the neighbour's homes. Of course, Pat didn't make a report, let alone a complaint, because thet wouldn't be neighbourly. 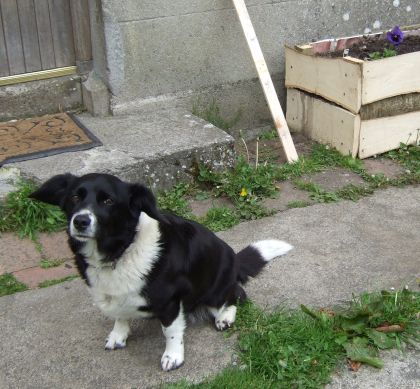 And let me add that, although we didn't have mammalian house-pets when I was growing up, I am not anti-dog. I offer a picture of Rashers-the-dog on our front stoop in May 2009 - 3½ years before she fell ill and was killed at home by the vet. <snif!>