Christmastime is characterized by long nights and cold. In the old days, this wasn't a huge bother: folks still had eight daylight hours to: stir up the embers and set the kettle, break the ice on the water-butt, splash the face; see to the stock; gather some winter fuuuuel; go to mass; visit with the neighbours; and get back inside before the end of twilight. Because holiday, the day could be extended for a bit of a ramble about the olde days. For that, all it took was a candle or a kerosene lamp and a hearth to sit round.

Today, not so much? or worse Today, rather too much. We have so much . . . kit . . . convenience . . . comfort. Although really, things like indoor plumbing, microwaves, and WiFi don't add much to the essentials of good cheer and good company. And damme but it really sets me off kilter when this unconsidered background infrastructure fails.  One of the conveniences of modern life is that you can get weather reports from Met Eireann with 5 minute updates of precipitation across the country to know when to get the laundry in off the line. As well as precipitation, those Met Eireann movie-maps show thunderstorms incommming or [phew!] by-passing the home place. Shortly after [a light] lunch on Xmas eve, I checked the weather and noted a clatter of lightning strikes in Co Waterford as a weather front moved NNE across the coast. Thought no more about it. 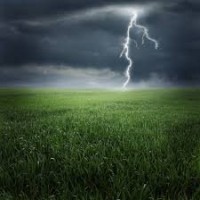 CRASH! At 15:35 there was the most tremendous bang, seemingly inside the house, a simultaneous flash of lightning and all the lights went out; a couple of minutes after there was another flash followed 3 seconds later a clap of thunder - that's 1km distant and moving away. We've had loads of unannounced power-cuts here. The light go off, the modem cuts out, the fridge goes silent . . . we phone 1-800-372-999 and log another power-outage. Then we potter about unplugging things, digging out candles, telling each other not to run the taps [own well, own pump; no power, no water]. This time there was the CRASH but also a smell of burning in the bedroom nearest the fuse-box. There was still an hour of day-light so it could have been worse timing for settling into siege mentality. A bunch of battery-powered strings of LED Christmas-lights turned out to have more utility than expected when bought.

I'll use this opportunity to give a shout out to the country's ESB maintenance crews. They were super-busy that evening because the power-outages were scattered across the Sunny South East as sultanas through an expensive Christmas cake. You can follow their progress by telephone or internet updates and they are pretty accurate in estimating when normal service will resume. Their reports soon settled on a back-in-the-saddle time of 19:30 - four hours away, so the mac-and-cheese was heated through on the gas hob rather than crisped up in the electric oven. We ate, we tidied up, the lights came back on, the wireless internet had not been fritzed [altho the telephone land line had]; we settled in to watch Jeremy Paxman haranguing young people on University Challenge . . .

. . . and the lights went off again! This time the e.t.a. power was 03:00 Christmas morning. Somewhere in the neighbourhood, a handful of ESB Effectives in  hi-viz  gilets were getting wet, up ladders, for about 12 hours in the dark - just doing their best to keep everyone else's holiday on track. Hats Off! And I hope they clocked a huge wodge of overtime.

Power went off again! on Christmas Day in the late afternoon, which made us smug about deciding to have Christmas dinner by daylight. We were only without power for 2½ hours in the re-play. This time all our devices were fully charged and books had been given as Christmas presents, so we were not really inconvenienced at all at all. The ESB Effectives answered the call again and sorted everything out double quick. Did I say that our landline went phut in the first CRASH strike? Digiweb, our phone company, allows themselves 5 working days to restore service. For infrastructural services, privatization is a scourge, it just allows a vampire layer of pencil-pushers to elbow themselves between the network and the punter - and make a living as service providers.