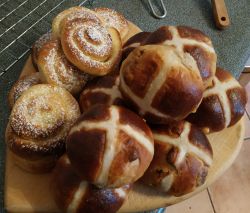 All flour-based baked goods depend upon getting some gas, usually CO2 into the doughy matrix and expecting that this gas will expand in the oven and create an airy loft from the lumpen stodge. There are two ways to make this gas - biological or chemical - and biological has a far longer history. The biological method [as in hot-X buns R] uses microbes, chiefly yeast and Lactic acid bacteria (or indeed a SCOBY = Symbiotic Culture Of Bacteria and Yeast) to convert sugar into carbon dioxide and ethanol:

Because it's a bio-process you need to be careful with the temperature: nothing much happens in the fridge but if you get too warm [40°C is positively hot in this context] the microbes will curl up and die. 25°C [our airing cupboard] is close to optimum.

The Blob has had A Lot to say about fermentation, so today we're going down the chemical rabbit hole. Interest sparked by a question from Dau.II aka Cookie "aluminium-free baking powder? isn't all baking powder alzheimer-free?". Which elicited an aside about the increasingly weak link between Aluminum and Alzheimer's. And then down the hole we go . . .

Trad Irish soda bread gets the acid from buttermilk or sour[ed] milk. The bicarb is added to the dry flour as a white powder and the wet acidic liquid a) swells the flour grains and sticks them together b) interacts with the tsp of bicarb in the mix to start fizzing c) also starts to breakdown the starch into its component sugars. Scones are essentially the same gig with the addition of butter [with options on sugar, raisins, grated cheese]. I guess, in a way, it's part biological and part chemical. They Say that, while yeast bread requires a lot of kneading to develop sheets of gluten to catch the rising CO2, soda-based products require a quicker mixing and into-the-oven before the CO2 leaves the matrix and settles on the kitchen floor - it is heavier than air. For scones, in recent years, I put the mass through a few [quick] rounds of roll-and-fold. This seems to give more loft to the scones, perhaps because regular air gets caught between the laminations and this is more grist to the heat causes gas to expand mill. For the same reason as minimize kneading and get cookin' soonest, you must pre-heat the oven.

But nobody in, say, England has easy access to buttermilk and sour milk is "p💀is💀n". The answer is to sell a wholly chemical product called baking powder, in which the acetic and lactic acid in the natural product is replaced with a crystalline chemical acid. In the old days this was often tartaric acid - often called cream of tartar or 2,3-dihydroxysuccinic acid = COOH(CHOH)2COOH and a filler like corn-starch or rice flour to soak up atmospheric water and prevent premature chemical reaction in the tin.Nowadays it is more likely disodium diphosphate Na2H2P2O7. Both of these acidic compounds have two fizzy H+s which will lever the CO2 from the bicarbonate . . . as soon as they get wet together.

This early reactivity is not usually a problem if it's just me knocking up a batch of scones or Myrtle Allen make a lightning round of brown soda bread. But it's an awkward PITA for Mr Kipling producing enough artificial food-like cakes to feed the City of Bradford. The cake and bread industry called forth their food engineers to create SAP sodium aluminum phosphate = NaH14Al3(PO4)8 and/or Na3H15Al2(PO4)8 a monstrous relative of disodium diphosphate which only starts to work when external heat is applied. This means that an acre of baking trays can be assembled over some time in the Mr Kipling factory and all shifted into the oven together. This is much more efficient for fuel and labour. The jury is out on whether adding a load of aluminum to the diet of the nation to make Mr Kipling's shareholders even more money is an unalloyed good. The FDA categorizes SAP as GRAS - generally recognised as safe [whc Bloboprev].  YMMV?