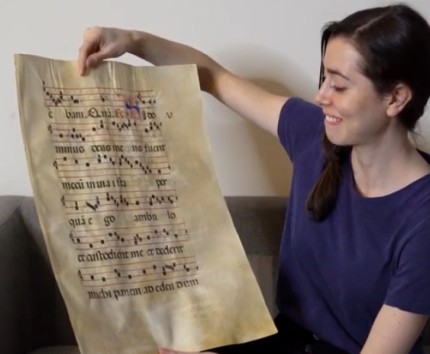 It's a single vellum sheet from an antiphonal, hand-written in Italy, probably about 1470. She picked it up at [SLYT 15 mins] the New York Antiquarian Book Fair 5th-8th March 2020. Even from the [blob crap quality] picture it is clear that she is delirah with herself and her acquisition. It's nice that such items are not so crazy-rare that an ordinary New Yorker, with some $400? of disposable income, can have one to hold . . . forever. Well, actually, of course, young Bridget is going to hold this page for not more than 10% of its 550 year life so far.

20 And Jacob vowed a vow, saying, If God will be with me, and will keep me in this way that I go, and will give me bread to eat, and raiment to put on,
21 So that I come again to my father's house in peace; then shall the Lord be my God:
22 And this stone, which I have set for a pillar, shall be God's house: and of all that thou shalt give me I will surely give the tenth unto thee.

. . . just after the bold Jacob has finagled his older brother Esau out of Isaac's, their father's, blessing and is on his way to seek him a wife in a different land. While Esau was an hairy man, Jacob was a smooth operator. The stone mentioned in v.22 has just the night before served as Jacob's pillow and he has had a rough old night dreaming of god and his angels. Even after this vision of heaven, he's still bargaining with The Lord: there really is no stop to Isaac's hubris.

I like Bridget's enthusiasm for using artifacts to reflect on our place in history and how all of human history is a compressed microsecond in the scales of universal time. Bridget feels for the 15thC scribe whose finger-prints are being smudged by and mingled with her own . . . "Was he handsome?" she muses. My own brush with the finitude of history was much shorter "One evening she [my elderly relative in 1973] said that, as a young girl, she'd talked to an old man who used to cross the river by stepping-stones. That convenience was replaced by a bridge in 1815." pshaw only 160 years.