It's not like an On / Off switch but as you get older the balance of power & responsibility shifts down one generation. When Dau.II was born in 1995, she wasn't able to blow her own nose and it took a year before she was able to move about on her own two feet. Everything had to be done for her. Soon enough, I'll be in a similar state myself: leaky, demanding, incapable and I am reasonably confident that she'll either "take care of me or take care of me" [51st State reference]. At the beginning of May she came up to visit her parents, noted that Progress in the Garden = nil and insisted that we all go visit the wonderful, if slightly seedy, Wilton Garden Centre in Bree, Co. Wexford. We came away with some tomato plants about two fists tall and sundry packets of seeds: mainly swiss chard; french beans and courgettes. We had some saved seed about the house as well and lashed them all into little pots. "Right that's me tea sorted for when I visit in August", said Dau.II

As an experiment, I suggested that we plant half the beans directly into a little pot of damp compost; and leave the other half of them soaking over-night in water. We know the answer to that question now: do not soak beans in water for 12 hours if you want them to sprout and flourish. They will serve only as food for fungus. Soaking is for beans intended as food [human or fungal]; for seeding allow the water to come more slowly direct from the soil. The swiss chard was a total bust: about half sprouted, struggled upwards on feeble red stalks, and fell over when watered even by gentle rain. Some of these recumbent lazy-arses would struggle upright again but none seems interested in make progress beyond 4 teeny leaves. Saved poppy seeds of indeterminate age? Nope! Only one courgette seed sent out anything green. Eleven (!!) weeks later we can make a progress report.

Inside the 16 x 9 m poly-tunnel is a raised bed 7 x 1 m which is filled with soil, horse-shit, kitchen compost and other nutritious material. The problem with poly-tunnels is two-fold: over-heating and under-watering. Over the years, I've evolved to be direct and thrifty with water.
This works well because it delivers water to where it is needed and encourages the plants to dig deep and bring up some mineral goodness. The bucket handle also serves as anchor point for strings for climbers. 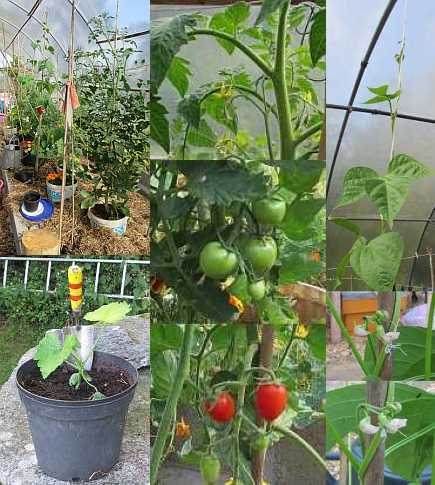 Wysiwwg - wot you see is wot we got . . . so far
Left column: Top: panorama of the veg bed: beans to left, toms to right just like an old country hop with the lads and lasses. Bot: the courgette with trowel in house colours for scale.
Centre: tomato flowers; green toms for frying at the Whistle Stop Café; two minute red tomatoes.
Rightside: the tallest bean stalk is 2.4 m above grade - about as tall as I can reach. The leaves are the size of my face. The flowers can be seen below in two different clusters.
Posted by BobTheScientist at 07:39