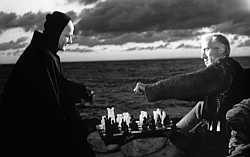 I R old, which is an extraordinary consequence of having been born in 1954 when infectious diseases were being run out of town by a combination of vaccination and antibiotics. My father contracted pneumonia in 1925 and it was touch and go for several days as his 8 y.o. immune system played chess with death; but he was a fighter like Bergman's knight and eventually he pulled through, worn out but alive. 70 years later, 2 y.o. Dau.I also had a brush with pneumonia and spent 2 nights in the Children's Hospital but antibiotics made the episode almost a walk in the park rather than a walk into  the dark . We have squandered the healing elixirs on dog's ear-aches and as growth promoters for battery chickens. A few years ago, I went grimly poetic about an apocalyptic return to a world without antibiotics. In that grim new reality, children will die from a thorn-prick, or diphtheria or scarlatina as they did 100 years ago. In 1900 infant all-cause mortality fluttered around 16%; in 2000 it was less than 1%.

MRSA isn't usually a problem for kids, but it will exit your Auntie Flo in a box when she goes into hospital for a hip-replacement. I've had a lot to say about MRSA [bloboprevs] before. Not least because we could have been contenders in the search for novel therapeutics against this strain of Staphylococcus aureus. One of the anti-microbial peptides that we discovered lurking in the chicken genome, turned out to be quite good at killing MRSA and a little bit better at that task when we tricked about with the peptide sequence. If only MRSA was the only species that was resistant to almost all the antibiotics, but hospitals particularly are also held hostage by Carbapenem-resistant Enterobacteriaceae or CRE. As if a blizzard of acronyms - all including R-for-Resistant - is insufficiently confusing /worrying, the meta-acronyms ESKAPE identifies the causes of most concern - S for Staphylococcus aureus etc.

In the bizarre market-driven world of Big Pharma, there is little incentive to develop novel antibiotics. The big players see more $$$s for shareholders by focussing on chronic disease which will keep on demanding therapeutic supply for decades. To keep people ticking along feeling crap is better for business than infectious diseases where the patient is either cured in a week or dies - neither outcome being a cash cow that keeps on giving.  Any work being done with antibiotics by Big Pharma is most likely to be tinkering about with chemical structure of known bacteria-killers to produce a Me Too variant that can be patented because it is technically different but is so similar to existing antibiotics that resistance can be expected even sooner than average. The microbe collective has the number of whole classes of antibiotics. Another issue is that newer antibiotics are edging over the line in the balance between safe and effective. They kill the invasive bacteria, yes; but they also do damage to human cells and systems. Even to the extent that we cured the infection but the patient died. What we need, what sick kids need, what the medical front-liners need is some wholly new, now for something completely different, antibiotics that will win a few years of effectiveness (and safety!) rather than a few months.

Thankfully some academic scientists hanker after being the next Alexander Fleming (and thereby having a shot at a Nobel Prize in 10 or 15 years time. A number of creative scientists have had a punt in the direction:
Now Brice Felden's lab at U. Rennes in Northern France have made a startling, sparkling discovery by modifying part of a known toxin produced naturally by Staphylococcus aureus. Their key insight was to separate the toxic-to-humans aspects of the Staph molecule from the toxic-to-microbes parts. Evolution so often produces a kludge - something that works even of it has some peculiar side-effects. "Works" means enhances the survival or reproductive fecundity of its owner. A large part of modern molecular medicine is trying to dice and fillet and modify molecules so that they work better in the system being investigated. Team Rennes looked at the sequence of the natural toxin and started to strip out chunks and test them for their anti-microbial properties. One amino acid sequence FFWRRVK showed promise when they made artificial copies of the linear sequence and linked the ends to make a circular molecule [Pep18 below]:

So far, so natural, but they did some combinatorial experiments to see if they could make an even better microbe killer by swapping out the natural amino acids for wholly artificial molecules. Pep19 has acquired two aza-β3-1-naphthylalanyls to replace the 1st F and the 3rd W amino acids. Naphthyl as in naphthylene = mothballs. The Team in Rennes have some really promising results showing that some of the 20 molecular variants they generated can be granted the three-fold palm of success:
1) kills a wide range of bacteria
2) does little damage to mammalian cells
3) seems to stave off the development of bacterial resistance to attack
They will be looking for venture capital to take their hope-for-the-future up the regulatory chain towards a marketable and life-saving addition to the medical war-chest.
Posted by BobTheScientist at 07:19