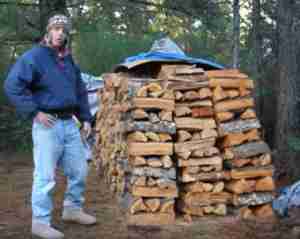 This above is moh2o's cord of firewood, three different species in a well-built self-supporting pile. Well, I've finished Lars Mytting's Norwegian Wood and I feel like a failure. I wrote in the New Year about reading an early paragraph and rushing out to split some wood. I have a dreadful feeling that I was waaay too late. What I have failed to grasp is the separation of two stages in the life of fire-wood: a) drying and b) storage. It is much better if your get the wood dried down quickly to <20% moisture in a process of evaporation before the wood succumbs to the necrosis of fungal infection. Even invisible fungi can block the water-filled tubes of the wood, so that water cannot easily escape.

One of the last things Tadek, our wooffing Pole, did during his second winter with us was thin out a dense dark stand of laurel Lauris nobilis, which was sharing the bottom of our yard with the 6 tree apple orchard. The apples were probably heirloom species but were almost useless to us because the fruit was +5m up in the air at the end of wispy twigs. There was nothing near against which to lean a ladder. The reason for this was that the laurel and apple trees had been fighting for the light. It was so dark in the orchard that no grass grew. Tadek went mad with the chain-saw and cut down a LOT of laurel and then cut it into lengths about 30 cm long, and then returned to Poland. I started to stack the small-enough logs into a pile at the edge of the orchard. The bigger pieces, which were easy to split, I split. Then my competent friend René came up and said my pile would be at nothing unless I raised it off the dirt floor. So I threw down what I'd started, found a number of beat-up pallets and, with the help of a 12 y.o. Dau.II, stacked them all up again so that they were clear of the worms. It filled out at 1m x 1m x 5m and I covered the top with election posters weighted down with the gnarly unsplittable lumps. I opened one end of the stack last winter and am working through the rest now.

Stacking the wood in situ was a good idea because it meant less barrowing the stuff about, but tucked in a corner of the orchard; up against the dry-stone wall; covered with plastic was not exactly encouraging of water loss. It would have been better to stack them more openly where the sun and especially the Summer wind could whistle through to carry away the moisture THEN after a significant weight loss move t'buggers somewhere dry and convenient to the stove.  It's been the same with all my other wood stacks around the farm: too dark; not enough air-circulation. And especially, I have failed mea culpa mea maxima culpa to strip off the bark from the unsplit logs to expose more water-loss area. The bark is, by design, waterproof - if it wasn't trees would weep bitter tears down their trunks.

Lars Mytting and his compatriots actively go out into wood-lots and cut down trees - huge debate about the optimum time for felling. Or they get firewood delivered by authorized dealers - who guarantee them as less than a maximum moisture content. They get to choose their species and to some extent the individual tree (nice and straight, please, minimal knots]. We on the other hand have been able to rely / subsist on what has fallen out of the ditches (usually rowan  / mountain ash Sorbus aucuparia) or come crashing down from the crown (ash - Fraxinus excelsior & scot's pine Pinus sylvetsris). This bounty tends to become available during winter storms and I try to cut them up there, then. When the fields are dry in the summer is the time to load up the Yaris and bring them to the yard. Since we had Young Bolivar working with us, we've had a nice airy wood-shed with hit-and-miss walls and a well-high roof but I should nevertheless dry the wood first in the breeze.

You should check out "artistic woodstacks" on Google Images: despite firewood being essentially ephemeral, some people prefer to make something beautiful as well as functional. "Have nothing in your houses that you do not know to be useful, or believe to be beautiful" Wm Morris.
Posted by BobTheScientist at 07:52