Abdominal surgery can be dangerous even in modern times under a well-practiced surgeon. Quite apart from leaving a sponge or a clamp behind when they sew up, nobody can supervise the healing of the internal sutures.  If you're unlucky, you can get adhesions in the wrong places as the tissue remodels across the gap. So when Pat the Salt went all yellow on his 90th birthday 2.5 years ago, we were concerned that the removal of the gall stones blocking his common pancreatic duct would lead to trouble. The immune / inflammatory /healing system [it's essentially the same machine] tends to run down and get crotchety in old chaps like Pat and me. We were delighted, therefore, when the problem could be solved with a tube down his gullet and a brief pulse of ultra-sound to fragment the stones. At least, even if surgery was indicated, Pat could have signed an informed consent form having been apprised of the risks and potential benefits.

About 15 years ago, I was discovering and characterising immune genes while working in St Vincent's Hospital. The human genome was available and we were trawling through the chromosomal sequences looking for anti-microbial peptides. As evolutionary biologists, we asked whether these genes and their protein products might be present in chimpanzees, Pan troglodytes, our nearest relative. It turned out that a big cheese in Dublin Zoo was the son of our family lawyer and I approached him as a fellow member of the Protestant Mafia. "Next time you take a blood sample from one of the chimps, can we have 1ml to help push the frontiers of science?". Phlebotomists always take 10ml from sufficiently large animals [less for mice!] and there's always some to spare after the vet has carried out all the necessary tests. Well really, you would have thought I'd proposed to vivisect his daughter! We certainly could not have any blood for any purpose except to service the well-being of the bled chimp. The point being that our primate relatives cannot do informed consent, but effectively deserve the same consideration as humans, which rights are vindicated by the appropriate ethics committee. IF we filled in the appropriate forms, submitted an application, secured approval from StVs Ethics Committee and the Zoo's Ethics Committee then maybe we could get a chimpanzee turd to analyse. With PCR, and the fact that intestinal epithelial cells are continually being shed into the fecal matter, that would have been enough for our purposes. But the required bureaucracy put a stop to our gallop and we drifted off to chase down easier prey on the prairies of science. 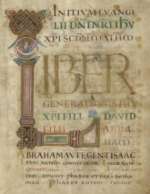 These reflections on the recent past came to mind because of a paper published this year by Dan Bradley's [prev as Samaritan] group in TCD. They went back 1000 years to analyze the provenance of The York Gospels [R title page], a beautiful and exceeding rare Anglo-Saxon illuminated manuscript. Over the last 20 years, Bradley has built up an expertise in Ancient DNA - making sense of the signal that remains after the DNA of the originally living thing has degraded to wisps and fragments. They have to be super careful to avoid modern contamination because there is more, and better preserved, human DNA on a pair of unwashed hands than in a whole neolithic femur. Needless to say, librarians, archivists and curators have been unwilling to let scientists go at their inventory with a hole-punch . . . no matter what the scientific question. What they were prepared to do was allow Bradley's people to have [part of] the sweepings from a restoration project where the pages had been cleaned up with judicious use of a rubber eraser. The pages of the Gospels were made of parchment (cleaned, cured artiodactyl skins) which is pretty robust but even so, enough sheep and goat cells were present in the rubbings for Bradley to identify the species. Most of the pages were calf Bos taurus but some of them, maybe later infills for missing or damaged pages, were sheep Ovis aries skin. The original scientific paper [1Mb PDF] with details of methods and results. One of those details is the phrase ". . .large volumes of eraser waste (150-250μl)" that's about equivalent to the eraser on top of your pencil, which is a bucketful in nanotech speak.

Bradley and Co have to be circumspect and cautious in their reading of the data but The Blob can throw some of that caution to the wind. One of the sampled pages had sufficient material of sufficient quality to call the breed of cow which contributed it: it looks N European / Norwegian Red / Holstein-Friesan. [Norwegian Blue is a sort of parrot] Two other pages may fall outside that range, which may suggest a provenance from much further afield. That provokes an intriguing image of trading animal skins across the continent in the Dark Ages, like the stone axe unearthed near Canterbury with provenance from the Apennines in Italy [bloboprev].  They also found differences in the amount of human contamination of the artiodactyl traces. This is supposed to be either from more or less handling / reading on pages or more recent handling during restoration. 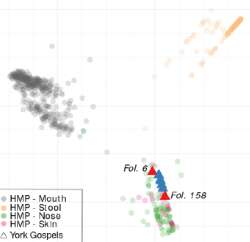 If you can find human DNA on the folios, you can also find traces of the human microbiome if you look for them. That's a whole other level of complexity because we are all toting about maybe 10,000 different species of bacteria and each one will have a characteristic DNA signature. The most informative way of approaching these data is a multivariate statistical analysis, comparing the Gospel traces with the known human microflora. We know that our different crevices and orifices harbour quite different communities. The bugs on the York pages fall decisively in the midst of the bacteria which inhabit our noses and skin and quite different from oral or fecal samples. This suggests that medieval scribes and readers sneezed a good bit but that they washed their hands between bathroom and lectern. Good thing too, it's The Gospel after all. The Muslim attitude to hand-washing has always been more proscriptive,
Posted by BobTheScientist at 07:45