I know you're anxious about the jigsaw.

After the family mounted their camels and fled the mountain of washing-up to their own  places, there were 119 pieces remaining in the box. The following morning, I sat down at it and started to put pieces in place at the rate of about 6 per hour: in between washing dishes, fetching firewood, throwing some fill in the worst holes in the drive-way, and eating some quite peculiar combinations of left-over food. Later on I had another session at the jigsaw and tried a brute-force approach. I sorted the pieces by fundamental shape [they were as All Black as the Kiwi rugger team so colour was little help] as in the diagram: fat man, star, thin man, cross, pushmepullyou, asymmetric. Then I picked up each possible piece in turn and tried it in one place . . . iterate 100+ times. It got a little quicker as the pile of unplaced pieces diminished. At about 2345 on New Year's Eve, I sent a passive-aggressive message to all the jigsaw abandonneers saying that I had placed 1999 pieces and one was missing, presumed lost behind a mince-pie or thrown in the fire in frustration. Then on the very stroke of midnight, The Beloved pointed to the AWOL hiding in plain sight camouflaged on top of another very dark part of the assembled jigsaw. If you believe in that sort of thing, it's a good omen for 2018. 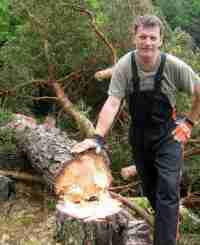 I got a lot more pleasure from starting on one of my Christmas gifts. Hel Ved, alt om hogging, stabling og tørking - og vedfyringens sjel was written by a journalist from Norway called Lars Mytting [L in his element] and published in 2011, and became a runaway best-seller. This might have been understandable if it was another Scandinavian page-turning whodunnit, but is actually a manual, as indicated by the translation Whole Wood, everything about chopping, stacking and drying - and the wood-burning soul. But it's a manual for a life well-lived quite apart from giving you the calorific content of a well-dried cu.m. of larch Larix europaea. The English language version (annoyingly for the US market so all the metrics are converted to feet and pounds) loses chunks of this meaning by making a cheap crack at The Beatles and Haruni Murakami and losing all mention of the soul: Norwegian Wood: Chopping, Stacking and Drying Wood the Scandinavian Way. Presumably on the premise that the purchasers of the English language version don't have room for a soul on the gun-rack of their pickup truck.

That's a shame because the book is nostalgic, lyrical and romantic as well as strictly practical and also, in its way quite compelling. Reading about the desirability of drying fire-wood before it is fit for the stove, I realised how wrong I had been to think of storing some large ash Fraxinus excelsior trunks in the round. I had the smaller stuff from the tree, which fell out of the ditch during Storm Ophelia, all cut to length and stacked in the woodshed. Accordingly, I flung the book down and spent a warming 40 minutes outside splitting the logs into cake-slices that would expose more surface area to the air. If nothing else, you should remove the (designed to be water-proof) bark from any logs if they are to dry quick enough to deter fungi. It was a gorgeous crisp dry Winter day - I can't imagine what I was thinking to be inside reading a book!