A window on the world for the blind

⠠⠊⠞ ⠊⠎ ⠥⠝⠉⠇⠑ ⠇⠕⠥⠊⠎ ⠃⠊⠗⠞⠓⠙⠁⠽ ⠞⠕⠙⠁⠽
I was leaning on the gate at the end of the last century with a vacant look on my face when our neighbour-above drove a flock of his sheep past to his fields, which are one holding higher up the mountain than ours. Inevitably one hoggett was was bringing up the rear and I drew attention to the fact that she only had three legs. Neighbour knew about that and told me a story about his five year old youngest boy who had been playing 'farmers' in the barn. He found a syringe and a large bottle of penicillin on a shelf and decided he's treat one of the lambs like he'd seen his Daddy do. The massive overdose had been too much for the lamb, which had died. I never did find out what happened to the hoggett's 4th leg.

I was reminded of this because today is the Louis Braille's birthday [as noted above]. Louis was the youngest son of a smallholder from Coupvray in the Île-de-France.  You can't make much money on 3 hectares of vines and a potato patch but at least your family can be self-sufficient in wine. Le patron, Simon-René Braille, accordingly worked part-time as a leather-worker. At the age of 3, Louis was imitating his Papa doing some close work with an awl, when the point glanced off his work and into his eye. An infection set in, spread to the other eye, and within a few weeks young Louis was plunged into darkness. Dang!  But his parents and siblings were really supportive and determined that Louis was not going to vegetate in a chair in the corner of the kitchen and he was soon to be seen pottering about the village with a cane. At the age of 11 he secured a place at  l’Institution royale des jeunes aveugles, founded by Valentin Haüy in Paris, thanks to the sponsorship of the Maire and Curé of Coupvray.

Haüy had invented a system for reading and writing by touch consisting of letters embossed on heavy paper. With practice, the blind could pass their fingers across the letters and recognise them as different. The process was expensive to implement, so the available texts were short and limited in scope. Not really satisfying to a chap with relentless curiosity like young Louis. He was an accomplished musician and a natural mathematician and when he graduated from the school he was immediately given a billet as an instructor. He also played the organ in, and was a pillar of, the local church.

aNNyway, shortly after Louis started at the school, Capitaine Nicolas-Marie-Charles Barbier de la Serre [Charlot to his friends: kidding, they called him Bouchée-des-noms] of the french army came to demonstrate his night-reading cipher.  This cunning invention, using a series of raised dots, allowed communication between soldiers without betraying their location by speaking or showing a light. Braille realised that this was a much better system than Haüy but nonetheless too complex for normal use among the blind. Braille spent the next three years experimenting and perfecting a 6 dot system (reduced from Barbier's 12) which gives 2^6 = 64 possibilities. Plenty enough for 26 letters of the Latin alphabet, with codes for digits and punctuation - if you ignore Capitals. French, in contrast to German, is very parsimonious about Capital letters, English is somewhere between. Here's the basic code: 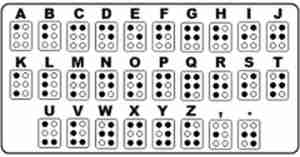 Now you can read the message at the top. You can write using this. The first word has three letters because the first character ⠠ is a <shift>prefix to Capitalise the next letter. Likewise, numbers are prefixed by a #, but laboriously on a digit by digit coding, which you can see in the recurring backward L of our telephone number ⠼⠊⠼⠃⠼⠑⠼⠑⠼⠛⠼⠁⠼⠛, that's an incentive not include superfluous digits when writing out π. hmmm Greek: how do the blind of Greece, Russia, India and Japan manage? They must have their own coding, in the same way as Irish Sign Language is different from British and much more Eurocentric. Also like the [Ancient] Greeks, the digits 1-9 are represented by the letters #a-#j. Actually for longer numbers, including my phonio, one # suffices: context determining whether letters or digits follow. After the basic Latin alphabet, each country is free to makey-uppy its own conventions for how to use the additional character set. Thus é in french is different from é in spanish.

English doesn't piffle about pedantically with accents, we just make the spelinge super-eccentric; but that does free up a number of braille characters. In Anglobraille these are commandeered for letter=word codes for common words - and, the, for - as well as for common suffixes like -ed and -ing and lots of other combos are used to take advantage of the redundancy in English orthography. fr = friend; tm = tomorrow; qk = quick. Those blind people were more than a century ahead of us in spkn txt.

Louis Braille was notably weak-in-the-wind - probably TB - and died shortly after his 43rd birthday in 1852, having definitely made his mark on the world. Chapeaux!
Posted by BobTheScientist at 10:14