We do love our cars. My mother called hers SS Independence and she drove it until she reached the age of 85. The idea that it was available 24/7 was comforting to her.  For several years after she stopped driving, she still kept the car in the garage in case her bicycling gardener needed to take stuff to the dump after his Thursday morning's work. But you can't get away from the fact that a car is a lethal weapon. Even my humble Toyota Yaris which can barely carry me and six feed sacks up a hill weighs in at 1,000kg. The inertia of that mass travelling at 80km/h is enough to homogenise the internal organs of any pedestrian who gets in the way.  Think about it? A .38 bullet weighs in at 8g and travels at 400 m/s, so the force imparted is about 1/10,000th that of a small car travelling too fast.

I have locus standi to sound off about this because I almost became a statistic 20 years ago when I was whacked off my bike by a woman looking for her phone while driving.  The bike was killed but I only broke 5 bones and walked away. The one question that everybody asked me was "were you wearing a helmet?". Last year cars killed 17 (seventeen!) cyclists on Irish roads. All the commentary includes an element of victim blaming which would be impossible to articulate if the crime was sexual assault. Why wasn't s/he dressed in fluorescent orange? with flashing 500W lights fore-and aft? and what about the helmet? In the 6 years before I underwent my RTA, me and my bike cycled 40,000km round Dublin - which is equivalent to once round the world - and never needed to 'use' a helmet, because although I was hit by cars three times, my head never got as far as the roadway. It's important for us to reflect on this as a society because cycling to work or school is an important part of the solution to the obesity epidemic. If cycling is only allowable on designated cycle-paths by people dressed up like Bibendum the Michelin Man, then only the young and superfit will do it - and they don't need the exercise!

I was reflecting on my NDEs because on New Year's Day, a spokesperson from the Road Safety Authority was on the wireless to announce that the number of people killed on Irish roads [N=158] was the lowest since records began in 1959!! That's an extraordinary achievement given that the population has increased by 70% over the last 60 years but more significantly there are 2 million cars on Irish roads this year which is six times = 6x more than in 1959.  You'll want to see the downward trend which shows a) that talking about a 16% fall in numbers of road-deaths 2016-2017 is as silly as talking about a 16% increase this time last year. 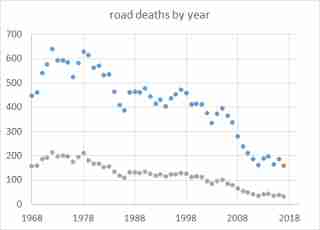 Yes, that is correct, more than 600 people were being killed each year by vehicles in Ireland in the 1970s. The upper line of dots indicate the raw road-death figures. The line below is road deaths per million people which makes the downward trend look more relentless and less susceptible to random fluctuations. Nobody is going to claim that some policy or intervention caused 2016 to see an increase in road-deaths.  We must also prevent anyone claiming that they or theirs are responsible for the down-blip in 2017. It's much more likely that both changes are stochastic "shit happens" random fluctuations.  Two interventions that probably have made a difference are
a) the first government scrappage scheme in 1996, which gave £1000 to anyone who traded in a 10+ year old car for a new model. That got a lot of old clunkers, including our 13 year old Opel Astra, off the roads. We spent £8000 less £1000 on a new Škoda Felicia which we ran into the ground over the next ten years.
b) the introduction of the NCT National Car Test in 2000. That ensured that all cars had functioning brakes, seat-belts, working lights and sound body-work.
It is remarkable, to me, that 23% of the people killed on the road in 2016 were not wearing seat-belts. Despite my suggestions [yes I've been here before], nobody has the courage to report how many of them were 'under the influence' at they time they offed themselves and their passengers . . . and those 17 unfortunates riding bikes.  In my previous rants, I spoken about 'worse things than dying' with RTAs. Being dead is one thing, with a certain finality, being injured in a car collision might be worse. So I looked at the stats for that. To be honest, I was expecting the relationship between deaths and injuries to have an average value with random fluctuations about the mean. 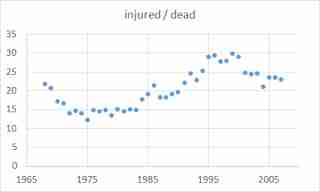 But that isn't what I see from the graph of  injuries / deaths. from 1959 [records began] to 2007: there were about 20x more people injured than killed in RTAs. In 2008, they stopped reporting 'injuries' and started to clock only 'serious injuries' which came in at about 2x the deaths. What I find unaccountable is the steady increase in 'injuries' through the 1980s and 1990s. I can't imagine it's like the steady increase in the number of disabled war veterans through the 20thC: in WWI any sort of head injury was likely fatal but by Vietnam you had a much better chance of living . . . or maybe existing, with horrible injuries. For the Irish RTA injuries I wonder if it's related to our increasingly litigious  society: everyone including the family dog claiming to be injured from a bit of a tip in the car-park? If that's so, it may account for the switch to only recording really life-changing damage because the stats on whip-lash were getting inflated.

There you are now and there you have it. We done good collectively on making the roads safer during my lifetime. Pity about those cyclists.
Posted by BobTheScientist at 07:37