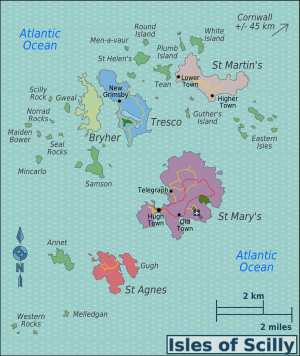 Roger Deakin's book Waterlog is a record of him swimming across England.  He must have been an otter Lutra lutra in a previous life or will be reincarnated as a selkie. He's dead now [Grauniad obit], and that's a loss - he was only my age, but he's left behind a couple of truly magical books: Wildwood: a journey through trees is the other.  Waterlog starts with a plunge in and around the Scilly Isles 50 km West of the toe of Cornwall in SW England. Between swims he asserts that the little archipelago was once a larger contiguous landmass called Ennor that was drowned by sea-level rise after the last ice-age.  As he swims across the sound, he looks into the depths and sees two ancient field boundaries meeting at a right angle as well as a circular sheepfold . . . read on in Google books. How mystic, wonderful is that? Deakin would hardly be surprised if he flung his wet-suit out to sea and " . . . ere he dipt the surface, rose an arm /  Clothed in white samite, mystic, wonderful, / And caught him . . ." because people assert that the Isles of Scilly and/or Ennor are the same as Kingdom of Lyonnesse that features so much in the Arthurian legends.  It was, for example, home to Tristan the main squeeze of Isolde.
Scilly consists of 55 islands if defined as "land surrounded by water at high-tide and supporting land plants" but only 5 of them are inhabited by people:
As you can see from the map St Agnes is linked, at low tide, to Gugh.  Similarly, further North, Gweal is linked to Bryher.  As Gweal means 'place of trees' and it is now a barren rock, this is toponymical evidence for sea-level rise.  A prehistoric farm-steading is located on Nornour, an islet that is now far too small to support any agriculture. Gugh (=hedge-rows) was big enough to support a population of brown or rats Rattus norvegicus until a determined effort a couple of years ago seems to have been successful in exterminating them. The nesting sea-birds, like on  Middle Island, now have a fighting chance although there are still feral cats.  It seems unlikely that anyone is going to be able to shoot these alien varmints, the British, like the whole interweb, being soft in the head about kittens. Because the area is pretty and has good tourist potential - much better than Juan Fernandez for example - there is a lot of data on alien species of plants, fungi and animals and their effect on the native wildlife.  The biological coverage is almost as good as on Sherkin which has its own Marine Station.

There are reasons why a republican wouldn't want to go visit this outpost of Empire because almost the entire freehold is owned by Charles Windsor as part of his fiefdom the Duchy of Cornwall.  This entity has been parlayed into a multimillion £$ business worth £750million and generating profits of about $20million/year.  You can buy a laborer's cottage in fashionable Tetbury, Gloucs, from Himself if you have £250,000 available. If you're my age, and grew up in Britain, you might also have Scilly-baggage from the fact that pipe-smoking Prime Minister Harold Wilson used to go on holiday to the Scilly Isles. His adventures there in the 1960s helped bring Scilly into view as a potential holiday destination for thousands of citizens of his socialist paradise.
Posted by BobTheScientist at 06:42