Last Autumn, I was writing about Wade Davis the charismatic and restlessly articulate Canadian ethnographer and the art of finding your way about the featureless ocean without a compass or sextant, let alone GPS and short-wave radio.  Then I borrowed a book from Salty-dog Pat, The Beloved's father called The Last Navigator A Young Man, An Ancient Mariner, The Secrets of the Sea (1987) [Amazon 0.04c] by Stephen D Thomas. The author has since become Steve Thomas the television face of traditional carpentry.  The book is about how young Steve went to a remote Pacific island to hang out with one of the last traditional navigators of Polynesia.  He learned the local language and enough about navigation to make a few voyages out into the trackless ocean and find his landfall: not always on target first time and not without some anxious moments. The art of Polynesian navigation depends on being able to recognise certain named stars as they clip the horizon at night and knowing where the various island lie with respect to these directional clues.  When you get close enough, you can pick up minute differences in the way waves curl over and also bio-navigational clues from the fish and birds that are in your vicinity.  Finally you hope to be able to pick out the cloud tops of the islands if volcanic. The coral atolls, having a max height above high-water of a couple of metres, are unlikely to induce local cloud cover, so are much harder to bear down upon. The existence of the local inhabitants seems to be quite hand-to-mouth as a moneyless lifestyle was transitioning into a wage economy in which you could buy tinned fish from the tiny shop rather than wade out to the reef and spear your dinner. It was like a microcosm of the world as young men despoiled the resources of fish, coconuts and turtles and had no respect for traditional taboos or values. 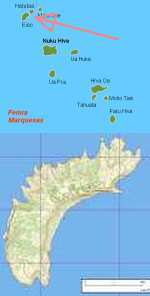 I caught an related, if over-dramatised, documentary about the genetics of Easter Island and the trade routes of ancient and modern Polynesians. I didn't realise that Easter Islanders would speak Spanish to television crews; but they pay their taxes to Chile. If you dig up an ancient stone tool on the beach of Easter Island and find that it is an exact geochemical match for the rocks of a quarry on Eiao at the far end of the Marquesas then it must have been brought there by canoe.  If, on a steep-sided volcanic outcrop, you find a shell fish-hook made from a mollusc that only inhabits shallow lagoons, then that same canoe most likely brought it in exchange for the stone adze.  The Marquesas are about 400km in extent from Eiao in the NW to Fatu Hiva in the extreme SE.  Easter Island is a staggering 4000km from Eiao and its valuable basalt stone quarry. And although Pitcairn [previously] is considerably closer there is good evidence that Rapa Nui [Easter Island] was peopled from the Marquesas and maintained trade-links for centuries.  Running out of trees through ecological despoilation didn't help to maintain those links and when Europeans arrived. The people on Rapa Nui were living in their own universe.  The documentary also pushes the findings of Eric Thorsby that South American DNA is present in 'pure' Rapa Nuistas to the tune of about 8%.  The growing consensus is that the ever travelling Polynesians went further East and brought back women and sweet potato Ipomoea batata from South America and may have traded them for a bag of Kentucky Fried Chicken, bones of which bird have been found in Chile in possibly pre-Columbian strata.

More islands
Posted by BobTheScientist at 06:17