There is an old, long and potentially moralistic shaggy-dog story about a boy who was born with a golden screw in his navel. As he grew up he became more self-conscious about this anomaly and wished that he was like everyone else.  After visits to his GP, a dermatologist, a general surgeon, a chiropracter, an aromatherapist [continue list for as long as your audience has the patience], he finished up in a wigwam on a remote island of the Pacific North-West coast with a shaman.  The shaman required him to return at the next full moon, remove all his clothes and lie precisely here on the floor of the tent. As he lay there in the dark, he noticed a moon-beam passing through a hole in the fabric and tracking down his midline.  When the moon beam reached the golden screw it seemed to pause and the screw turned and turned [continue for as long as your audience has the patience] until it fell with a clunk to the floor.  He jumped up, shouting for joy . . . and his arse fell off. Moral: be content with who you are and resist peer-pressure. Ah so!

It's mildly amusing the first time you hear it. At The Institute, we've been doing some Golden Navel work in Year 1 Cell Biology. An ethical cat is among our scientific pigeons because, since the year dot, we've telling students to analyse a drop of their own blood a) to demonstrate osmosis and hypothesis testing b) to view the different sorts of white blood cells and see if they really are 1% of the total (99% being red blood cells) c) to determine ABO and Rhesus blood group status and calculate the gene-frequencies. We may be able to continue, but the bureaucratic burden may make it not worth the effort.  Which is a shame because there is rather more pedogogical benefit in these practicals than some of the others which are boring but safe. OTOH, we could have a very useful session discussing the ethical issues of taking your own blood. We needed something to replace the scheduled blood practicals that wouldn't burden the support technician with a long list of hard-to-source material. 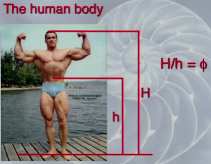 As Cell Biology is for Sporty People, I thought it might be interesting to test reaction times in left and right hands by having a confederate drop a 30cm rule between the thumb and fore-finger and see how far it fell before a pinch stopped its gallop. Scope for prior hypotheses: variation among people; right-hand quicker/slower than left; women quicker than men; short people (with short arms) quicker than bean-poles. Scope for data analysis: consistency of replicates, appropriate statistical tests, sample size sufficiency.  Actually there are ethical problems here too: Q. what do you do when a student is so slow on the uptake that he misses the falling ruler entirely; A. prior statement asserting that slower reaction times are associated with more reflective thinking. Then during the weekend before The Off on these new practicals, I found a youtube video on the Fibonacci series and φ Phi [preφously] the golden ratio. In among all the guff about φ being "most pleasing to the human eye", the harmony of the spheres and the profile of the Parthenon, it is frequently asserted that the height above ground of the toupée and navel is in the golden proportion [L rule applies not only to the Greek God in pale blue speedos, but also to fat-arsed sofa-pilots who could only wear those same speedos as a hat].  So my Cell Biologists tested that ratio in themselves.

But not before I described the cunning plan to Dau.II. She immediately put her finger on the issue of multiple testing [I'd have her on my scientific crap-detecting team in a trice]: the human body is well complicated and you can measure pretty much everything with a tape-measure: hat size, digit length, hand-span, girth.  Then you can compare a long list of measurements with each other: somewhere in that tsunami of numbers, you'll get something close to 1.6 : 1.  The interesting extension of such thoughts is that there are fundamental similarities among members of the same species which allow us to recognise each ‘type’.  Dogs, despite a huge range in size and shape are nevertheless dogs and obviously different from cats.  Likewise, all humans are more similar to each other than any of them are to dogs or cats . . . or chimpanzees, our nearest relatives.  Gibbons, our primate cousins, are literally knuckle-draggers [R. very handy for swinging through the trees] and distinctively different from humans. 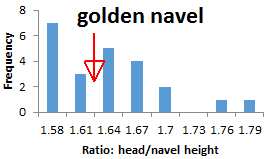 Results. Up to a point Lord Copper it is true that the navel/head height ratio is in the Golden ratio.  But there's a disturbing level of variation about the average.  It doesn't look normally [bell-shaped, Gaussian] distributed to me.  There is no significant difference between men and women for this proportional parameter.  Indeed, for our students there is no significant difference in the height between M & F: we have some stocky blokes and tall girls.  In the histogram [R], I've marked where 1.618 falls and acknowledge that it is rather close to the average but there is more than 10% difference between lowest and highest ratio.  By the end of next week, we'll have a sample of more than 100, so some of the random variation may even out.  There may be an issue that these measurements are taken by the students themselves rather than by fully trained Navelmetricians.  One chap reported his height as 1m77, which is within the normal range but claimed his navel was only 66cm above the floor.  I'm about the same height but 66cm is about my mid-thigh; so this fellow must have a prosthetic navel at the end of an elastic ligament . . . or no legs?