I think most people who read The Blob will be aware of mass extinctions, when a disproportionate number of species step off the plank into the seas of oblivion. Extinction is forever, and when the last member [or the last member of one sex] of that unique conglomeration of genes and homeostatic systems dies, we'll never see the like again.  Evolution is the result of a long series of accidents and contingent events that would be impossible to reproduce. There are some who claim that the study of evolution is not scientific because of the impossibility of replication.  Whatever . . . it has a great deal more explanatory power than the idea that every sperm is sacred and individually crafted by a deity.  Extinction was happening in a dribbling out fashion even before I was born: the last Quagga Equus quagga quagga went West in 1883 and the Tasmanian Wolf Thylacinus cynocephalus bought the farm in 1936 [or possibly survived, a guerrilla in its own neighbourhood, into the 1960s].  The latter is the bigger loss because there was nothing like the thylacine - the biggest carnivorous marsupial that survived the arrival of man in Australasia. The quagga OTOH is a subspecies of the same clade that holds Chapman's Zebra Equus quagga chapmani and it's conceivable that we could 'recover' the quagga by selective breeding from related, living animals.  A project that seems to me to be a quagga-quixotic time-wasting distraction on the scales of biodiversity. 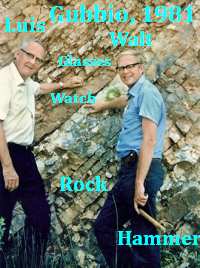 An event that weighs heavier on those scales is the great Cretaceous extinction of 65 mya which notoriously wiped out the dinosaurs and created the opportunity for the rise of mammals including ourselves in all their wonderful diversity.  We are, of course, and understandably, mammalocentric but there are only 5,000 species of us and we'd all look boringly samey to scientific insects [?10? million species] or nematodes [another million of them] - "all" mammals have seven cervical vertebrae for starters.  We've inferred quite a lot about the Cretaceous extinction from the fossil record and particularly from the strange observation about Iridium made by Luis and Walter Alvarez in 1980.  Luis was a Nobel Prize winning particle physicist and his son Walter was a professional geologist who discovered a thin band of Iridium-rich rock at the geological boundary between Cretaceous and Tertiary rocks.  That was weird because Iridium is heavy, has an affinity for Iron and is rarely found in the Earth's crust. Alvarez and Co [there were other collaborators who tend to get washed out of the story] suggested that the Iridium came from an extraterrestrial source as a massive asteroid collided with the Earth scattering debris from itself and the impact crater far and wide.  Being scientists they could estimate the size of the asteroid and the size of the crater and part of the scepticism with which their hypothesis was jeered received was the fact that no such crater was known to geologists. 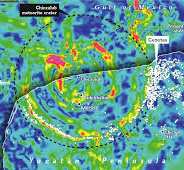 In fact, the crater had already been discovered by a couple of petroleum geologists, Antonio Camargo and Glen Penfield, who had difficulty recognising it as a crater partly because only 40% of the crater rim was on dry land in 1978.  In the map [L] of the Northern Yucatán peninsula you can see gravitational anomalies [Red scale] and cenotes, freshwater sink-holes as white dots. It is centred on the seaside town of Chicxulub which now gives its name to the geological formation. The crater is about 180km in diameter and might have been 20km deep when formed. It took a couple of decades to sort out and reconcile all the data: geological, biogeographical, climatological, palaeontological, ecological and biological. The consensus now is that the ejected dust created an earth-wide darkness at noon that might have lasted a decade: that put paid to photosynthesis as the primary source of biological energy on the planet.  The vaporized calcium carbonate rocks shoved up the atmospheric carbon dioxide levels to give an instant greenhouse effect.  There is even a suggestion that the impact was deeper than first thought and that sulphates were mobilised to causes deluges of acid rain.  Poor old dinosaurs with their peculiarities of metabolism were just not able to weather the changes.

In contrast, he little furry creatures, scurrying about between the dinosaur's legs and happy-as-larry in the dark, started to grow and diversify so that in a geological eye-blink all 20ish Orders of mammals were strutting a fretting their hour on the stage: bats, rodents, carnivores, cetartiodactyla, elephants, armadillos and uncletomcobblios.  Why is this event important? Because I am, even at this moment, using electricity to whack out another post on The Blob and so cranking up my carbon footprint for 2015. Shoving up the temperature a couple of degrees centigrade doesn't sound like much to us - sounds pretty good in drizzly Ireland - but may knock out a single over-sensitive species in our complex of inter-locking ecosystems.  Because it is system, that loss will have unpredictable and cascading effects on the members of the ecosystem who remain.
Posted by BobTheScientist at 07:14