Where do the Brits come from?

It's a conundrum where any of us come from, except that, if you go back far enough, the answer is "out of Africa". If you come from the parts of society that 'have money', or had 'land' you can trace your ancestry back quite a few generations . . . if you believe that surnames do actually track Y-chromosomes rather than suspecting that your father is the strikingly fit professional down at the golf club. It's pretty clear that my toney horse-riding protestant "blood-line" was given more vigorous life from the input of the red-headed cook who was the mother of my great-grandfather. If your family were humble artisans, you can only go back to when birth and marriage registration became mandatory in the mid 19thC But we're all lost, unless the Emperor of Japan happens to read The Blob, when we want to go back 40 or more generations. Archaeologists infer things from the shape of pot-sherds and burial practice but nobody is sure if these are culturally and genetically transmitted or just following the fashion of your neighbours. Historical geographers can spin convincing stories from the patterns of place-names - all those *thwaits *gates and *thorpes in what was briefly Danelaw in the East of England.

If you generate a helluva a lot of data, you can get some fine-mapping structure of the genetic make-up of the inhabitants of the UK.  This is what a group led by Peter Donnelly [before on The Blob] and Walter Bodmer from Oxford have done in their People of The British Isles PoBI study.  Published in Nature 19 Mar 2015. They went through their data and isolated 2000+ people all of whose grandparents had been born within 80km of each other.  That takes you back to about 1885 before rural depopulation sent everyone to hugger-mugger in urban stews and marry who-knows-who. They typed each of these people for half a million genetic variants aka SNPs and threw the whole mess into a huge computer program.  For good measure they added equivalent data of 6000+ 'continentals' from Scandinavia, Germany, Belgium, France and Iberia and gave it all a damned good shake.  The first outcome is that these data are extremely noisy, so that there is little-or-no predictive power - if you have a particular set of variants at these 500,000 genetic sites you won't have much confidence in placing your ancestors in a given tribe. You can't say you or anyone else has demonstrably Cornish genes or Yorkshire blood. 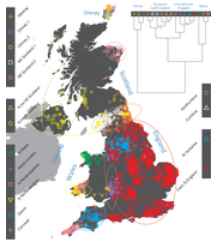 OTOH, the genetic data map out against the geographic landscape with compelling internal consistency, particular variants or groups of variants are disproportionately common is some of the outlying groups in the dataset. That's the second finding - England has a remarkably homogeneous core [L red boxes] which comprehends the south coast [Wessex], Grosser London, East Anglia, the Midlands up to Mancester and Liverpool and bleeding up the East coast at least as far as Teesside.  The grey heart of this region is 'missing data' nobody in the Great Wen has been there for two generations.

The third through tenth findings is in the detail of the periphery.  The most distant outlier in England is Cornwall which is distinctively different from neighbouring Devon which forms a distinct [pale blue] cluster within 'England', as do the Welsh Marches and the West Riding of Yorkshire [that pale blue is not partic related to Devon's, they just ran out of colours]. Yorkshire is thus a political construct in the same way as Nigeria is, only with two genetically distinct tribes rather than 30. In a similar way the South and North of Wales are inhabited by quite different people - more different than Scots vs English for example.
On the contrary, the Scotch-Irish from Ulster look to be the same as the Scots-Scots or at least those that come from Strathclyde; so geographic features like the North Sea sometime separate people and sometimes link them.  There's another very distinct cohort of people from Aberdeen and surroundings in the Scottish NE. Donnelly and Bodmer decide, in a rather loose and cavalier fashion, that these inhabitants of the Granite City are 'Picts'.  And the outliers, both genetically and geographically are the people of the Orkney archipelago North of John O'Groats. The Orcadians are not only a long way from everyone else [they form the tip of the long left arm in the tree of relationship to the right of the map [L above]] but they have within them three distinct groups at least as different from each other as whole [rest] of Scotland. 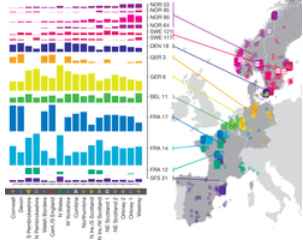 The second figure [R ] cross-references the genetic similarity of each of the 17 clusters from the UK with a similar number of clusters from continental Europe.  It there becomes clear that Orkney did take some genetic input from Scandinavia.  Danelaw on the other hand, for all the naming of parts which have stood the buffets of 1000+ years since Jorvik was a Viking stronghold, seems to have left rather little imprint on the present day inhabitants. From these data it is also apparent that everyone in the UK is a mongrel with a lot of input from NE Germany and another lot from NE France with a dash of Iberian, Belgian and Danish to spice things up.  With all this miscegenation, it's no wonder that for 200 years they were the Master Race. But like the Vikings before them the tide has gone out and all that's left is fragments of language.  If you can characterise the venerable Times of India as a fragment.
Posted by BobTheScientist at 06:34