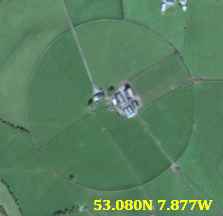 Down the rabbit-hole again.  I was looking for a place to stay in Birr, King's County a few miles North of the home-place and came across an option called The Ring Farmouse, Ballinree, which is plonked in the middle of a ring 300m in diameter. It is such a precise feature that it must be the work of human hands. This might remind you of a post I wrote two years ago about the Oola Oval which is a similar, if less regular, feature on/of the landscape.  The current owners of the Farmhouse suggest that the hedgerow dates from the late 18thC and they should be able to verify this by counting the number of woody species in a 100m stretch of the hedge.  The rule of thumb is one new species every century. Bizarrely [but hey, thanks!] they also draw attention to Clear Lake another feature of the landscape about 12km West on the plateau of the Slieve Bloom "Mountains" [here in Ireland we call anything higher than the kitchen table a mountain].  Clear Lake is a near perfect 30m circle [L from Google maps but it might as well be from NASA] very close to the Border between King's County and Queen's County but is almost certainly not the work of human hands.  How do I know? It's a feeling in my bones but I'm prepared to stake €5 on me being right about both this circle and the other, larger, drier entity to the West.  The lake is located in the Slieve Bloom Nature Reserve which is set aside to protect the hen harrier Circus cyaneus a rare raptor.  And on circular objects of uncertain provenance in the Irish landscape, let's not forget The Ringstone.
Posted by BobTheScientist at 07:53