Metafilter flagged up for me a youtube project a bit like Leo Sampson's project to rebuild the Tally-Ho, a 110 year old sailing boat. Julius and Dylan, two 20-something cousins, started building an iron-age round house in Ireland on Mayday last year and just finished in the middle of October 2021.

That first, foundation, episode is an interesting exercise it optimization: what is the most efficient way of transporting fist-to-skull-sized stones from the river to the building site? Clearly carrying them one at a time is not it. While carrying too many at once invites a hernia.

When I was 10 or 11, the school decided to build a new science block . . . on the cheap. In those ununionized times it seemed reasonable to have the fit, young, male teachers do a certain amount of the labour in the Summer evenings preparing for the next day's work by the actual builders. They hadn't invented Health&Safety or PPE in those far off days and we schoolboys were encouraged to lark about on the site and even bear a hand  in the tasks. I remember me and palomino loading two wheelbarrows with a single concrete block each and racing from the block pile to the scaffolding. I also remember thinking about whether it was better to plod across the site with a lot of blocks or fly them across one-a-time. Somewhere in between, for sure. Apart from efficiency, a few years ago, my second best, second-hand wheelbarrow collapsed when I loaded it with too much spoil from the drain. 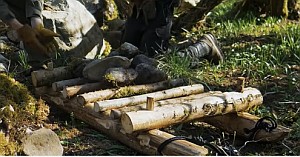 Dylan and Jules start off by loading an iron-ago wicker basket with stones and carrying that load suspended from a pole between their two shoulders. There is some discussion of the tare and nett weight when load-bearing apparatus is involved. 25 years ago, when we bought our old farm; languishing in one of the sheds was an exact pre-Massey-Ferguson replica [but with milled timber and nails] of the solution D & J come to [see R]. In episode 2, they acquire a horse! to do the heavy dragging.

And they have let the river do a lot of work in cleaning and grading the stones. Wave-washed Chesil Beach on the South coast of England does this sorting on a grand 30km scale. At the Iron Age hill fort of Maiden Castle 20km inland, archaeologists found caches of even-sized sling-stones clearly mined from this section of the beach. Or maybe that bit was made up by archaeologist Mortimer Wheeler in the 1930s - the sling-shots having been fetched from the beach in his Model-T Ford.