Charles Darwin spent his post-Beagle years largely recumbent, initially fathering an extensive squad of children [N=10 over 16 years] and then on the sofa downstairs reading through an extensive correspondence [average 2+/day in, say, 1872] and firing off suggestions about what to do next. He also read loadsa books of course and had the habit of dismembering big volumes so he could read them section by section. I think there are probably as many books published in Britain every day as the entire output of 1872.  In my restless search for copy, I have to rely on my own efforts, searching the blogosphere and my own, particularly unexciting, life at The Institute. I have, nevertheless, two 'correspondents' who send me links on a regular basis and I appreciate both link and sender. Not too many, mind, G - I don't want to direct all your mail to the spam-box.

All that preamble is by way of acknowledging a Guardian report on micro-plastics in the drinking water which was sent me by G a tuthree days ago. Microplastics are the new environmental bugaboo, not because they are unsightly but because they are invisible and we have no idea a) about how we are going to clean them up or b) about how harmful they are. Microplastics are defined as particles smaller than 5mm and larger that 1 micrometer µm = 1 micron = 1/millionth of a metre = 1/thousandth of a mm. Smaller than that we are talking about nanoparticles. E. coli is about 1µm across and 2µm long and a human cell is on average 30µm in diameter. 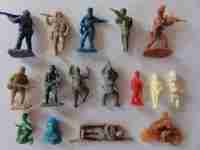 On microplastics on the beach, here's a nice imgur photo-story [and R for a sample] about beachcombing  on Tregantle Beach near Plymouth, UK, for the cohort between microplastics and my bailiwick of ropes, buoys and fishboxes.  It takes a particular and peculiar dedication to sift through 35 bagsful of beach detritus to find all the Smarties-tops, or Lego flower-parts.

The question is, Guardian readers, whether you should be really worried by the fact that 72% of your UK drinking water is contaminated with microplastics? First off, note that 28% of such sources had NO microplastics.  Of the rest, the contaminated, the average discovery was 4 particles per 500ml. Now there may be a long tail here, with some taps spouting 100s of microplastic chunks but I don't think 4 is enough to concern you/us. You could, for example, decide to go out and purchase a 1 micron mesh water-filter and sustain a disfiguring facial injury from a car crash on the way to the store.  That's not likely but it's a terrible outcome and Risk Assessment requires balancing that against a more common event (assault by microparticle) which has no known effect. No known effect is not the same as no effect! But the risk assessment helps put your worries into perspective and that should help formulate a rational course of action.

On the stuff-I-put-in-my-mouth front you should know that the FDA in the USA has allowable levels of contamination in the various food-products that pass through its labs and our guts. The plain people of Ireland thanks the US government for carrying out these time-consuming studies for the free[-loading] world, because, according to my calculations, our Food Safety Authority spends more of its time drinking tea than analysing it. The FDA's Department of Sanitation and Transport publishes a long, and fascinating, list of the levels of allowable 'filth' in food products.  Here we go with an excerpt:
The FDA recognise that it is impossible to keep insects and mice out of food-stores while noting that we don't want to pick earwigs and weevils out of the rice before we cook it. 50 insect wing fragments in your paprika? Meh! You want to look at your bacteria-laden tea-towels and pot-scrubber before your start to worry about evidence that your food is edible to both humans and rodents. 1000 insect frags, and you may take notice - it is evidence that hygiene standards in that food-processing process are dodgy and should be investigated and, probably, changed.
Posted by BobTheScientist at 06:58