When we shifted our stuff down the country 20 years ago we still had many friends-and-relations in Dublin.  We got into the habit of having a knees-up round about the Summer Solstice, which is close enough to my birthday and inviting friends down from The Smoke. With what seems, in hindsight, outrageous chutzpah we often put these city sophisticates to work on the farm. The old Irish concept meitheal is 'many hands make light work'. One year we had a blitz on the back garden and a couple of years later everyone had to help carry the steel hoops of our enormous polytunnel 300m up the lane. We sourced a butcher who would leave his own ideas of pork-butchery aside and give us a whole pork shoulder [about 10kg] which barely fitted into our domestic oven to be slow roasted for 20 hours. Pretty good days. 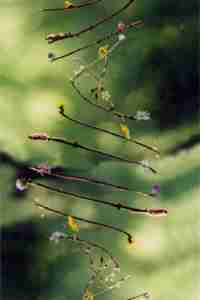 At least two fruitful relationships were struck up in our yard during these events. I have a thing about women-in-science and  tend to concentrate my scientific biogs to that half of humanity. If my friend Kieran was a woman, I'd write about how, over plates of pulled pork, it transpired that the immunological basis of a genetic genome wide association study in cattle was bloody daft not in step with current immunology research.  But Kieran, bloke and The Effective in that wrong-headed study, was put back on the rails, acquired an extra mentor and is now a successful scientist equally at home in the two disciplines. K & I, mainly K, later put together the proposal that secured Mentor of the Year for our boss.

Meanwhile under the ash tree, a hot young-than-me Lecturer in TCD Zoology Department, let's call her Paula, was talking to a neighbour of ours starting out as a found-art artist. The latter, let's call her Cathy, was born in NZ the other side of the world and had acquired a primary degree in microbiology, so a) could understand the language of science but b) brought a different tool-kit to the table.

Within a year (things take a long walk through bureaucratic treacle especially if they are different / unexpected / cross-disciplinary / interesting)  Cathy was installed as Artist in Residence in the Zoology Department. She started talking to final year developmental biology students but eventually got into dialogue with all the academic staff, even the old buffers, about their work.  Cathy created a number of pieces out of these exchanges; but more important, the scientists took up a brush or a camera to look at their own practice with more shiny eyes. The picture [R] 'unwanted genes on a DNA spiral' is prior art from Cathy's portfolio; prior in the sense that she created it before her AiR gig.  I like this ephemeral piece very much. She has captured the delicate folds and subtle colours of the reproductive parts of some plants that we treat as weeds because they grow in inconvenient places, secured them to spruce Picea abies twigs and suspended them in the fresh air for a few minutes as a Most Marvellous Metaphor.

What does it mean? The motto of my horse-riding protestant family is Respice, Prospice - Look forward, Look back. It means that we-the-scientists have to slow down, step sideways and look back at what we've done, STOP now, don't be rushing ahead until truly know where you are and what you've got.
Posted by BobTheScientist at 07:43