Over the hill? Not! 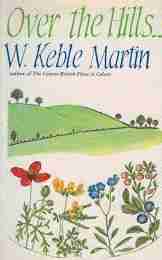 Writing about "the delicate folds and subtle colours of the reproductive parts of some plants" last week made me think of  W. Keble Martin about whom I wrote this trib as the vicar who drew a year ago. There I characterised him as "not an idle sort of chap and spent every available hour hunting out ordinary and rare plants and recording their distribution".  I now know that the key word in that sentence is available because years would go by when Martin drew nothing at all because he was busy with his day-and-night job as a vicar and rector of the Church of England. I know this because I just finished a sequel to The Concise British Flora in Colour called Over the Hills, which is available super-cheap on Amazon.  His Concise Flora was hawked around numerous publishers who saw the colour plates as only a cost and not an opportunity and refused the project. When it was finally published in 1965, Martin was 88 and the book became a publishing sensation which shifted 100,000 copies before Christmas that year.  It cannot have been only because there was a foreword by the Duke of Edinburgh. Hoping to net some more profit from the tsunami of petals, Michael Joseph asked Martin to write an autobiography which came out in 1968. For those of us nearing retirement, we may note that when Martin resigned his last parish at the age of 72, he still had 20 years of active life - and a second marriage, the old dog - ahead of him.

Keble Martin was born in 1877, the first drawing for the Concise British Flora - of snowdrops Galanthus nivalis - was made at Dartington in 1899 while he was waiting to go to theological college. He was still tricking about with the drawings 60+ years later. Some of them had to be traced and redrawn to get them onto better quality paper, some suffered from fading of colours and he had to re-label all the early work when he realised that English common names wouldn't answer any more, and he relettered everything as Linnaean binomers. Indeed, he lived through the period when Latin came to be acknowledged as the universal language for clear communication.  Don't get me wrong, in my tribs to An Englishman's Flora I've delighted in the diversity of names which ordinary people attach to flowers in their local world. But we no longer spend our entire lives living in the same parish and we may need to talk about snowdrops with Hungarians [hóvirág - lit. snow flower] or Germans [Schneeglöckchen lit. snow-bell]. On the back of his Flora, he was invited to submit four designs for standard-rate postage stamps; they [see R above] were published in 1967. The design included "Keble Martin" the painter and "Harrison" the printer in small print but neglected to include any ID for the flowers themselves - neither English nor Latin. I guess that's because each design included several species and a complete inventory of names would fill the stamp on their own.
Posted by BobTheScientist at 07:41