As science gets more expensive, there is more scrutiny on the bottom line. More science-trained people are securing work vetting science and counting deliverables and ticking them off against the list promised in the grant application. To pass muster and secure future funding you have to acquire a reputation for doing what it says on the tin. Inevitably, you'll be less ambitious, less daring in the hypotheses that you undertake to test. And the turn-around time is important too. A project has to be launched, trouble-shot, carried out and done and dusted as a couple of publications within three years. In the last decade, to my certain knowledge, two of the smartest STEM women in Ireland's premier university have been pulled up short and briefly demoralised by being identified as "failing to publish sufficient papers". This was largely because they had been brave enough and curious enough to take on a big question beyond the current frontier rather than something safer and same-old same-old that would satisfy the beanocrats.

So it's rare to find someone who had spent a lifetime accumulating data on a single system. My brief foray into molecular biology at the bench was mentored and encouraged by a STEM woman Monica Hughes who was halfway through a lifetime working in cyanogenesis. It's an interesting conundrum. Certain plants produce free cyanide when they are damaged by herbivores. Cyanide is, as any reader of Agatha Christie knows, toxic. Its binding to an enzyme cytochrome C oxidase prevents the production of the energy currency ATP by the electron transport chain in the mitochondria of all eukaryotic cells. After a few bites of cyanide enriched clover, the cow don't feel so good and drifts off to eat something else. We, and cows, have developed an olfactory receptor that recognises CN- and sends a signal "bitter almonds" to the part of the brain that integrates food, memory and behaviour. The conundrum is that plants also require a functioning electron transport chain and so cannot produce free cyanide all the time.

Clover Trifolium repens works it by having two different genes. One specifying the production of a cyanogenic glycoside [where the toxicity of the cyanide is reduced by bolting it to a sugar molecule] and the other to make an enzyme cyanoglycosidase which, on specific signals, cleaves the complex to release the free cyanide. The specific signals include physical damage to cells caused by teeth. 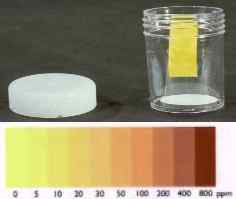 Monica had started off as a geneticist measuring the presence of the enzyme and the CN-glycoside in different plants, crossing them to work out how the genes are inherited and whether they are located on the same chromosome. There was a nice assay for the presence of CN using paper strips soaked in picric acid aka trinitrophenol TNP and put in a sealed jar with the sample. TNP is very similar chemically to TNT [prev] and also highly explosive. But a wee bit on a filter paper isn't going to go up with a whoomph. When exposed to CN, the yellow picric acid turns red and you can quantify the amount of cyanide present by comparing to standard colour strips. By cross-referencing parallel assays:
you can see whether a particular plant has the glycoside, the enzyme or both. It has the potential for many a nice little hypothesis-driven research project. Frost damage also triggers the enzyme and so you expect that clover higher up a mountainside will be more likely to be missing one or other of the genes involved in the process etc.

My project was taking the knowledge of the system one level deeper by tracking the changes in the DNA that are associated with the 'normal' and mutated genes. A few years after my ineffectual and self-destructive <ouch!> foray into her lab, Monica undertook to sequence the genes involved because that was what you did in that era and that was where the money was available. But the research was still rather academic than practical - despite the Final Paragraph of successive grant applications which asserted how important this knowledge would be for agriculture.

Later still there was a more genuine pay-off and a lot more foreign travel when she started a collaboration with scientists in South America who were investigating a parallel system of cyanogenesis in cassava Manihot esculenta. For feeding the starving millions, cassava/manioc has a very important part to play because it is hardy and drought resistant and a generous source of carbohydrate . . . and cyanide. The starchy roots need a lot of processing before they are safe to eat and a deep knowledge of the genetics of cyanogenesis holds out the hope for breeding varieties that are large, succulent, able to grow on marginal soils . . . and cyanide free.

Then it turned out that certain active principles in cassava might have something to offer the world of cancer treatment. Think about that: if you were a policy wonk trying to map a future for [insert country here] as a technological Nation, would you nurture the career of a plant geneticist in order to develop a cure for cancer? It takes a life-time to build the accumulated knowledge that generates this sort of quite unexpected breakthrough. It just wouldn't be allowed now.

As I was leaving Newcastle in the 80s, The Suits decided that Departments were really old fashioned and the whole University should be restructured as a collection of Schools. Uproar! Nobody will make me talk to those cads in Biochemistry. My integrity has been impugned. I am a Zoologist not a Biologist. What will happen to our secretary, photocopier, coffee-room, students . . . Funnily enough exactly the same thing happened 10 years later when I was working in TCD, with exactly the same muttering over coffee and prognostications of doom.  Monica otoh was entirely phlegmatic about the change: I've been around for a long time, I started in a school, then we were departmentalised, now we're to be schooled again. It won't make a bit of difference to my science. If that sounds like a heads-down, self-absorbed, egotistical response don't be fooled. When she was prevailed upon to be Head of School, Monica stepped up to the plate and carried out this thankless task with tact and efficiency. The best head I've ever known, was the assessment of one of her team when I met him at a conference. Chapeaux bas!

More women in science.
Posted by BobTheScientist at 06:45