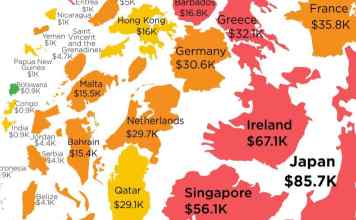 Here's and interesting graphic of per capita debt from howmuch.net which could do with some explanatory text from bigthink. It show that tax-payers in Ireland have taken on stupendous amounts of borrowing; half of which to bail out the banks in the financial crisis of 2008. The banks went mad shoveling electron-dollars from one hard-drive to another because the shovellers could convert their 'secondlife' dollars into real Porches, whores and sandwiches filled with whale filet mignon de baleine Balaenoptera physalus. But, unaaccountably, The Rules made by The Man dictated that we-the-people had to pick up the tab when the circus tanked. The bankers got to keep their Porches and productivity bonuses.  If your country doesn't feature on the poor quality pixellated pizza above you should check out the source above. This is a well-handy way of displaying the data because it shows that islands with rather small populations like Ireland and Singapore can have huge relative debt even when the absolute numbers fade in comparison to the USA because there are 100x more yanquidogs.

For years I have been commending the Norwegians for investing their share of the windfall from North Sea Oil and Gas in future-proofing their nation and big infrastructural projects. They also, according to me, paid off the National Debt. I have been contrasting this with Margaret Thatcher's use of the UK share to give massive tax-breaks to the middle class, distribute the public housing stock into private ownership,  ditto all the public utilities; kill the railways, build motorways and encourage everyone to have their own car. Those in a position to buy their own council house, buy British Telecom shares, or receive a 25% pay-hike for academics in Universities [meeee!] are now asset-rich while the subsequent generations are shanked. Moan Moan. Whether my analysis of Norwegian debt was ever correct, the country now has a per capita burden of $23K each. That's a lot better than Ireland or Japan, but a lot more onerous than Argentina $6,300, China $1,300 or Liberia $27.
Posted by BobTheScientist at 07:17