"The Bravest of the Brave" aka Le Rougeaud from his ruddy complexion died this day 201 years ago. Maréchal Michel Ney [R at the height of his powers] came from Sarrelouis / Saarlouis on the border between France and Germany. The town is currently in Germany but has been shuttled back and forth between the superpowers to East and West over the last 500 years. Michel was born in 1769 into a family of francophone coopers who were also fluent in the local dialect of German. You had to be bilingual if you wanted to have a working business or needed to argue the toss with your neighbour about his over-hanging apple tree.

Trained to boredom as a notary and civil servant, he ran away for a soldier's life at the age of 18 and joined the French Hussars. Not having blue blood or an escutcheon, he was excluded from the officers' mess in the army of Louis XVI but he achieved promotion through the ranks because he was bright and willing and carried himself with confidence. When the monarchy fell, the new egalitarianism allowed him to win his commission as an officer. He travelled all over Europe from Lisbon to Moscow over the course of the next 28 years. In the Peninsula War he as c-n-c of the rear-guard as La Grande Armée retreated from Portugal to the Pyrenees, he dextrously won time for the rest of the French so that the retreat didn't disintegrate into a rout. Ney was conspicuously courageous in his leading from the front like my name-sake and distant rellie who died at the head of his regiment at the crossing of the Nivelle - almost the last engagement of the Peninsula war. He fought at Borodino [prev] and was the 'last frenchman to leave' Russian soil, again leading the rear-guard in the holocaust that was the Retreat from Moscow in 1812.

As leader of the Marshall's Revolt, Ney was instrumental in persuading Napoleon to throw in the towel and go with dignity, but no army, to exile in Elba in April 1814. Ney then swore allegiance to the reinstated monarch although his position was always that his loyalty was to La France rather than to the personality at the top of the pyramid.  A year after arriving at Elba, Napoleon was on the move again beginning the 100-days campaign that culminated at Waterloo on 18th June 1815. When the news arrived in Versailles that Napoleon had landed on french soil, the government dispatched Ney to stop his previous Chief and turn him back.  In a super-romantic encounter at Auxerre, Dan O'Herlihy Ney is unable to shoot or capture Rod Steiger the Emperor and rurns his coat again.  Here's take two [2002] of the same episode.

Ney was a key figure in the Waterloo Campaign, unable to follow through at the Battle of Quatre-Bras [16 June 1815] and leading a super-romantic but unsupported and ultimately ineffectual cavalry charge at Waterloo [18 June 1815]. Ney had 5 horses shot under him on the field of Waterloo. Running out of horses, he led a final hopeless advance of the infantry with the words "Venez voir comment meurt un maréchal de France!" but Death was not interested in taking him at that time. There are those who put much of the blame for the outcome of Waterloo on poor Michel's shoulders.  But the Waterloo Campaign could not have been won. There is no way that Europe was going to come to any accommodation with France with Napoleon as head of state. Losing Waterloo - which was in Wellington's own words "A damned close-run thing" - would have deferred defeat until the next battle. Napoleon, ever the optimist, was on a hiding to nothing, as we say in Ireland. 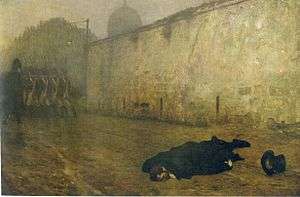 The end of Marshall Ney is too sad. Ney was a soldier's soldier but detested by politicians of all stripes and was about the only name on a list of traitors: as defined by those who had thrown in their lot with Napoleon. There is a distinct sense of Voltaire's quip "Dans ce pay-ci, il est bon de tuer de temps en temps un amiral pour encourager les autres." about another another country and another time when a senior officer - Admiral Byng - was shot by his own side in questionable circumstances.  At Ney's trial, his lawyer had a cunning plan for evading conviction because Sarrelouis was then part of Prussia and so the French court had no claim on a foreign citizen. But Ney was unbending in his loyalty to France "Je suis Français et je resterai Français!" Poor chap seems only to speak in exclamations! Condemned to death, he was shot [L by Jean-Léon Gérôme] outside the Luxembourg Gardens in Paris on 7th December 1815. Of course he faced the firing squad with open eyes and gave them the command to fire! Chapeaux bas!

A Russian officer who expressed delight at the end of an old enemy was stripped of his rank by the Emperor Alexander Александр Павлович I. That kind of romantic chivalry about warriors on the other side is still about. There's a famous story about the William Callaghan, the Captain of the battleship USS Missouri, who in April 1945 insisted on giving an honourable burial to the top half of Setsuo Ishino a kamikaze pilot who had just crashed into the side of his ship.
Posted by BobTheScientist at 18:14