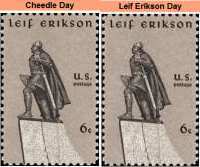 Leif Erikson is claimed by many to have discovered America almost exactly 500 years before Columbus sailed the ocean blue in 1492. Of course, the Norwegian-American community would like this to be acknowledged as A Day. And that wish has come true: yesterday, as every 9th October, was Leif Erikson Day. The day will be jostling for attention with Grandmother's Day [invented by a brand of coffee in 1987]; Talk like a Pirate Day; and St. Piran's Day. Every special interest group has their own day: for me and mine it's Darwinday.
At 03:26, 9 October 2015 some smart-ass perked up the Wikipedia entry for Leif Erikson Day with the observation that the banner above, the picture of the the stamp of the statue of Leif Erikson, looked a bit like cheedle. Which is defined on UrbanDictionary as: The sticky orange substance that sticks to your finger tips when you eat Cheetos. Eeeuuuw. The change won't be there for long - Wikipedia is flagging L.E. Day on their front page and as soon as America wakes up someone will restore order-and-respect to Leif Erikson and the Norwegian People. Note added in press - I was right: the Wikipedia community took just under 4 hours to "Reverted to revision 684822981 by Tedickey (talk): Last apparently clean version; later vandalism by more than one user not fully reverted"

Why 9th October?  Because that's the day the good ship Resaurasjon arrived in New York Harbor after a three month voyage from Stavanger.  I say 'ship' but she was so tiny a sloop that 'boat', or even 'thimble' might be more appropriate. At 52ft [16m] long and 16ft [5m] at its widest Restaurasjon was about the size of our modest house but had 52 people aboard who were political / religious / economic refugees from bare-bones farms and blighted villages on Northern Europe who were seeking a brighter future in America. The idea of sharing our gaff with 50 other people without recourse to any garden while heaving up and down in mid-Atlantic with insufficient buckets for spew . . . makes me queasy thinking about doing it for a day. 96 days of such invasion [don't forget the lice, mice and biscuit-weevils] of personal space, well, that boggles the mind. The response of the NY authorities (this was 68 years before Ellis Island was opened for business) was to impound the ship and fine the captain for running a grossly over-crowded ship.  Slavers were still trading in 1825 and I don't think they could have been much more crowded than Restaurasjon. It took an intervention from President Adams to free the ship and rescind the fine. Protestant Norwegians were what the Federal Republic wanted to plough their fields and people their factories: Feds Say: bring them on. I've made a similarly naive argument about the desirability of giving house-room to all those consulant paediatricians from Aleppo.

Hungarian MEP György Schöpflin is worth listening to about the Syrians, razor-wire, detention and inhumanity.